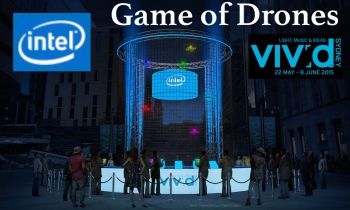 A vivid Game of Drones: just one of the transcendently cool installations to see at the 2015 Vivid Sydney festival, 22 May to 8 June 2015.

Over the last seven years, Vivid Sydney has enjoyed its stellar status as the world’s largest festival of light, music and ideas, and for the fifth consecutive year, Intel is sponsoring the event.

Intel isn’t just any old partner, but has been responsible for powering some of the most exciting and innovative installations Vivid Sydney has to offer - and 2015 is no different.

Before we get to the thrilling Game of Drones, one of the other hotly anticipated installations this year is ‘Transcendence with Intel Inside’, a remarkably grand structure featuring food and beverage outlets, designed by leading new media artist Joe Crossley.

This eye-popping installation promises to take you into the next dimension, housed inside a massive three-story structure in Martin Place, illuminated with a mesmerising, code-driven light show. 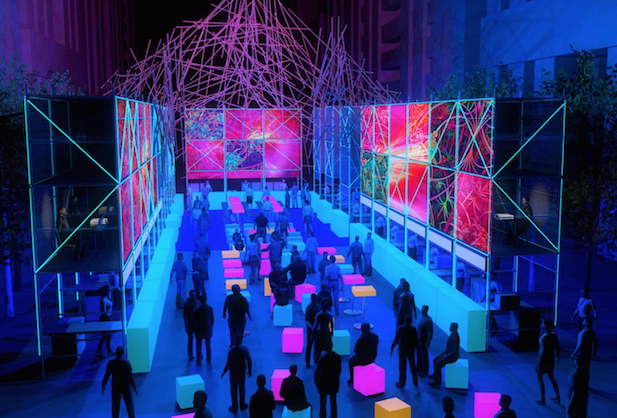 Each evening a different, hand-picked light artist will take control of the installation, using computer codes to determine the bold, striking movements of colour that will appear.

In addition to the light show, Intel will debut its ‘RealSense’ technology - using 3D cameras that respond intuitively to your natural movements (smiles, waves, winks), immersing you into a world of 3D experiences.

RealSense will see you immersed in a phenomenal interactive experience that brings human senses to devices, allowing more natural, intuitive and immersive interactions with technology such as gesture control, augmented reality, and immersive chat.

Intel Australia MD Kate Burleigh said: “When entering Transcendence, visitors will feel like they are stepping right into the future – it’s an experience all the family will enjoy,” Ms Burleigh said.

In plain English, this means you - and the public - will be able affect the installation with your movements - so be sure to rock!

As you can see from the image, it promises to be a stunning spectacle that brings together the fields of new media, art, IT and technology.

Then there’s the cleverly named Game of Drones, which puts you in the pilot’s throne.

It’s a first for Vivid Sydney, where visitors of all ages are invited to take control of a playful swarm of colourful drones, joining in the fun as the remote-controlled bots engage in a skyward bumper race using Intel-powered tablets, illuminating a massive, specially designed drone enclosure in Martin Place.

These two installations alone ensure Martin Place will be one of the most vivid spots in all of Sydney over the festival’s 18-day run.

The intriguingly and amazingly appropriately named Destination NSW CEO Sandra Chipchase said, “At Vivid Sydney we celebrate the interplay between creativity and technology and putting art into the hands of the public.

“Intel’s new drone installation reflects this concept and is another great hands-on opportunity for visitors to Vivid Sydney.”

Intel’s Kate Burleigh noted how Vivid Sydney is the perfect platform to engage the public in the wonders of technology, and said: “Vivid Sydney is an event that continues to push the boundaries, using technology as the enabler to bring inspiring, fun and immersive installations to life.

“This year we’re bringing a first to Vivid Sydney by giving festival-goers a chance to fly their very own drone.”

Happily, it’s not just Martin Place that will get a giant splash of Vivid Magic, the footprint will spread beyond Martin Place to Circular Quay, The Rocks and Walsh Bay.

The Galileo technology brings to life artists’ creative concepts, acting as the brain inside many of the interactive installations including Arclight and Affinity.

Intel’s larger-than-life, futuristic robot Chip will also return to Vivid Sydney in 2015, who you can see in this video from a previous Vivid Sydney event:

More in this category: « NZ beats Australia in Netflix speed rankings No rest as Presto goes West in dramatic content expansion »
Share News tips for the iTWire Journalists? Your tip will be anonymous