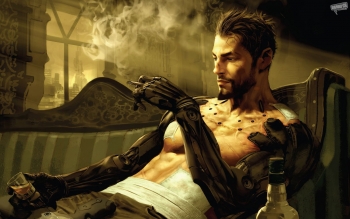 Game developing giant Square Enix has filed a trademark for a new title called "Deus Ex: Mankind Divided" at the Office for Harmonization in the Internal Market - Europe's trademark and design registry.

The trademark, which was filed on 27 March, doesn't say much but what it does say is that it relates to "computer game software, printed matter, and entertainment services."

As Joystiq reported Eidos Montreal head David Anfossi announced in October of last year that Square Enix and Eidos would be building what he referred to as "Deus Ex: Universe." Deus Ex: Universe was said to expand beyond games into media such as books and mobile games.

It's this writer's opinion however that it's very likely that Mankind Divided will be a new, major big budget game for Xbox One and PS4 and PC, and may be announced at this year's E3 conference in Los Angeles.

Deus Ex: Human Revolution was released in August 2011 and was a prequel to the original Deus Ex, which was released back in 2000 and is still widely hailed as one of the best video games of all time.

More in this category: « Review: Formula Legends PlayStation now has Foxtel Play »
back to top