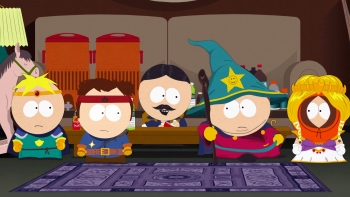 Any hopes that the new R18+ rating for games in Australia would mean no more censorship have been dashed - upcoming game South Park: The Stick of Truth has been censored for release down under.

The upcoming cartoon RPG, a collaboration between South Park Studios and Obsidian Entertainment, will be published by Ubisoft in Australia on 6 March 2014 for Xbox 360, PS3 and Windows and last week the game was labeled R18+ by the Australian Classification Board.

Despite the rating, the game has been modified, according to Ubisoft.

What has been changed for the Australian version of the game is unknown at this point.

Obsidian Entertainment had previously developed a number of role-playing games) based on licensed properties, such as Star Wars: Knights of the Old Republic II: The Sith Lords (2004), and Fallout: New Vegas (2010).

US agency ESRB has put out this description of the game:

"This is a role-playing adventure game based on the animated South Park TV show. Players assume the role of a new kid in town who embarks on various quests with other boys in the neighborhood. Players can engage in turn-based combat, selecting attacks from a menu screen. Players use various weapons (swords, baseball bats, hammers), magic spells and melee attacks during fights; blood-splatter effects sometimes occur. Cutscenes occasionally depict “cartoony” characters dismembered or decapitated. The game includes several instances of mature humor and sexual material: one extended sequence depicts characters getting anally probed by alien creatures; another sequence (in an abortion clinic) depicts doctors using a vacuum to perform procedures on male characters; one level takes place inside the rectum/colon of a character (sex toys, random objects and fecal matter appear in the level)—all sequences are depicted in a cartoony and over-the-top manner. Characters are occasionally depicted nude (e.g., breasts, buttocks, male genitalia); one extended sequence depicts an out-of-focus couple having sex in the background; as players engage in turn-based battle in the foreground, sexual moaning sounds/dialogue is heard. During the course of the game, drug paraphernalia can be seen strewn around a methamphetamine lab. The words “f**k,” “sh*t,” “a*shole,” and “f*ggot” can be heard in the dialogue."

Ubisoft told Player Attack that a "slightly modified version of South Park The Stick of Truth has been approved for release in Australia on March 6."

More in this category: « Battlefield 4 tank tour Humble Store starts its Winter sale »
Share News tips for the iTWire Journalists? Your tip will be anonymous