Review: Need For Speed: The Movie 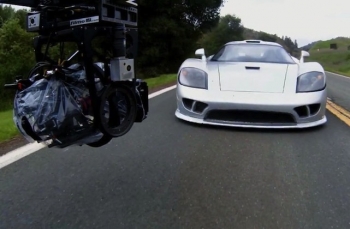 You might need to put the pedal to the floor and get to the cinema as soon as possible to catch Need For Speed, game-to-movie tie-ins don’t normally linger long at the box office.

The Need For Speed game franchise has been available on various platforms in many guises for decades now, and the producers and writer (George Gatins) have certainly attempted to insert as much Need For Speedyiness into this feature film.

But how can they take a video game, particularly a racing game, and build a full-length flick around it?  Well to the film crew’s credit, the result is pretty good, particularly if you go in with the level of expectation that the premise deserves.

Toby Mitchell (Aaron Paul) has inherited his father’s modest, but well respected performance mod-shop.  His loyal peers and co-workers seem to have no other life than to hang out with Mitchell, helping him deal with his money, love-life and rivalry issues.

Money because it seems Mitchell’s dad left him the family business along with a hefty debt that is paid month-by-month by Mitchell’s success at illegal American muscle car street racing.

Slimy Dino Brewster shows up to offer Mitchell the deal of a lifetime, finishing the work of Carroll Shelby, legendary driver and constructor, on a Ford Mustang, the car that becomes the star of this film.  Brewster plans to sell the one-off car for two million dollars, giving a cut to Mitchell.

But of course things go wrong, and Mitchell is unable to resist the lure of his driving rivalry with Brewster, and during an exciting tri-Koenigsegg race Mitchell’s life and brother literally crash and burn.

Emerging two years later from prison having been blamed for his brother’s death, Mitchell is looking for revenge against Brewster who covered up his involvement in the fatal race.  What better way to exact retribution than via a high-stakes illegal road race.

Enter Michael Keaton, whose role as the enigmatic millionaire race organiser, Monarch, was probably completely shot and edited in one day.

Without going to much more into the plot, Mitchell finds his way back into the Mustang for a Cannonball Run style sprint across the US, compete with slo-mo jumps that the Dukes of Hazard would envy and cop chases lifted almost straight from the Blues Brothers.

The final race is an explosive recreation of events seen in the titular game, it is absurd, tense and well excitingly framed.  For once the shaky-cam is kept under control enabling great sweeping views of vista, road and machine as the obvious conclusion looms on the horizon.

As we said, this is not a deep movie, but fulfils expectations and more.  There are plenty of nods to the game series – elements from recent Need For Speed games; Hot Pursuit, Most Wanted and even the maligned The Run are all present.  There are no semi-supernatural themes such as EMP blasts and radar-locking, but there is plenty there for fans of the video games.

You can catch the movie in 3D – if you really want Michael Keaton looming in your face – but the action is equally enjoyable in standard 2D, as long as the cinema sound-system is pumping.

Dumb adrenaline laced fun, there is not enough of it at the movies beyond Vin Diesel or super-hero tales lately, here is a chance for something slightly different.

More in this category: « Binge-watchers now exceed serial viewers The Last of Us coming to PS4 »
Share News tips for the iTWire Journalists? Your tip will be anonymous