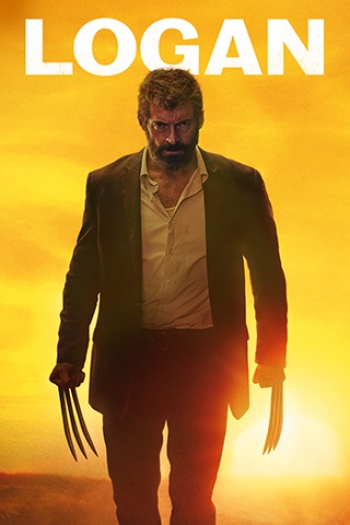 This is no superhero movie. One of Marvel’s most beloved characters is framed in a less-than-superhero way in the Blu-ray release of Logan.

Breaking the fourth-wall somewhat and set in the near future, Logan (Hugh Jackman) returns in a self-aware blood-thirsty tale of desolation. There are heroics, but the motivations are less about super-human mutant powers or doing good. Rather the Wolverine is called into action by activating the only option available.

Based on the noir-styled (in fact, there is a black and white version of this film titled Logan Noir, available via separate disc or digital download) Old Man Logan graphic novel, there is little link in this tale to any previous X-Man movie, or in fact the 2009 X-Men Origins: Wolverine release.

At times this is Mad Max, in others a direct influence with seminal westerns such as Shane (quoted in the movie) or Clint Eastwood’s Unforgiven. Whist the action comes as thick as blood for the majority of the movie, this is a character study at its heart.

Rated as MA 15+, this is not a movie for a young fan of previous X-Man or other Marvel hero movies. This is more in league with Netflix’s Jessica Jones or Luke Cage as a video representation of the comic genre, there is no understatement in the visceral violence presented, nor any apology in the story transitions that playout across the two-hour cinematic journey.

The direction of James Mangold gives equal character development to the title character as it does to Patrick Stewart’s frail representation of Professor X, Stephen Merchant’s underappreciated servitude as the albino Caliban and young mute mutant Laura (Dafne Keen).

The menace is great, the action rife and the tone, well, the tone never rises above dark. Jackman’s portrayal of a gruff, broken Logan remains largely unswayed through the running time, with relief coming only at the end.

This is underscored in the extras on the Blu-ray. One of the deleted scenes in particular, as described by the optional James Mangold commentary as a small homage to Little Miss Sunshine, shows how edit room decisions essentially maintained the grim tale.

There is also a well presented, obligatory, making-of documentary showcasing how the team wanted this last chapter of the Wolverine cinematic experience to rise above the pack of super-hero flicks, to become a redemptive account of the human aspects of being super-human.

More in this category: « Museum of Failure opens its doors in Swedish city Switch Media, Freeview deal on Google’s Chromecast »
Share News tips for the iTWire Journalists? Your tip will be anonymous