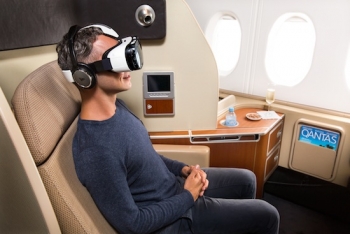 Qantas is teaming with Samsung in a trial of virtual reality entertainment, making it the first to provide inflight VR.

Qantas and Samsung Electronics Australia are carrying out a three-month trial of VR entertainment in the airline's Melbourne and Sydney international first class lounges fro mid-February, and also in the first class cabin on certain Airbus 380 services starting in mid-March.

"Qantas is committed to being at the forefront of innovation to give our passengers the very best and latest in-flight experiences, like accessing the virtual worlds of their favourite Hollywood blockbusters from the comfort of their seat 40,000 feet above the ground.

VR content will include a virtual tour of the Qantas first class lounge and a tarmac view of an A380 landing. Movies and other entertainment and infotainment - at least some in 3D - will also be offered.

Destination footage is being produced by Qantas and Jaunt, and first up is a 3D visit to Kakadu National Park, described by Northern Territory Chief Minister and Minister for Tourism Adam Giles as "one of the world's most iconic 'must do' tourism destinations."

This part of the project is backed by Tourism NT.

The trial will make use of Samsung's Gear VR headsets.

"Samsung is immensely proud to be working with Qantas to deliver Samsung Gear VR entertainment technology through the airline's first class services, both in the air and on the ground," said Samsung Electronics Australia chief marketing officer Arno Lenior.

"We believe Samsung Gear VR, one of the latest innovations from Samsung, will open new worlds for Qantas customers who experience the technology for themselves."

One of the problems associated with the use of head-mounted displays and virtual reality is motion sickness, which is generally caused by a mismatch between the information coming from a person's senses of sight, balance and touch.

Motion sickness is not uncommon among travellers, especially if you include occasional queasiness as well as actual vomiting, so the results of the trial could be interesting - it might be worth staying alert if you see the person in the next seat wearing a headset. Though that's not as big a problem in first class as it would be in economy...