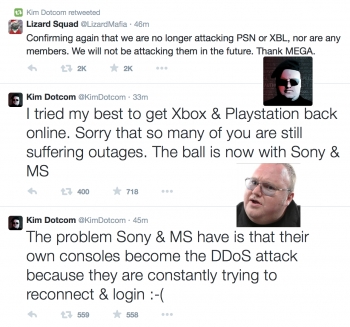 Kim Dotcom offered the PSN and Xbox Live hackers, Lizard Squad, vouchers to his MegaPrivacy service, which ‘stopped’ the attacks, but there are still issues preventing many from logging in to both services.

Kit Dotcom, the famously larger-than-life German alleged piracy king and Internet Freedom Fighter who lives in New Zealand, who had his MegaUpload service shut down by the FBI and who recently claimed to be broke and fearful of going to jail has tried saving the PSN and Xbox Live gaming networks - but has only partially succeeded.

Over at its Twitter page, the Lizard Squad said: “Thanks @KimDotcom for the vouchers--you're the reason we stopped the attacks. @MegaPrivacy is an awesome service.”

This is after Kim Dotcom promised the Lizard Squad a series of vouchers for his MegaPrivacy service, but sadly, Xbox Live and PSN users are still having issues.

Kim Dotcom has confirmed this himself at his Twitter feed, where he stated that:“The problem Sony & MS have is that their own consoles become the DDoS attack because they are constantly trying to reconnect & login :-( “

Then soon after, Kim Dotcom said: “I tried my best to get Xbox & Playstation back online. Sorry that so many of you are still suffering outages. The ball is now with Sony & MS”

Dotcom also retweeted a Lizard Squad tweet stating: “Confirming again that we are no longer attacking PSN or XBL, nor are any members. We will not be attacking them in the future. Thank MEGA.”

That said, apparent Lizard Squad member @LizardSquad69 appears to be continuing attacks on the PSN network, so whether the Lizard Squad is in full control of all its members it unknown. Who watches the watchmen who are hacking the hackers? No-one knows - not even Kim Dotcom, nor the Finest Squad, the anti-Lizard Squad hacking group which seems to have gone quiet about 19 hours ago.

The Playstation twitter feed notes that PSN is still down which you can also see from comments at the DownDetector website.

The Lizard Squad hackers have now directed their attention to the The Onion Ring ‘TOR’ anonymity network, claiming (seemingly without irony) that only hackers, criminals and pedophiles use the service.

So, if you wish to engage in the ultimate exercise in futility, try logging into PSN or Xbox Live while connected through TOR, but it may well be time to put down the games controller and go outside for a walk, read a book, watch a movie, ride a bike or do something else until the gremlins still inside PSN and Xbox Live have worked their way out of the system.