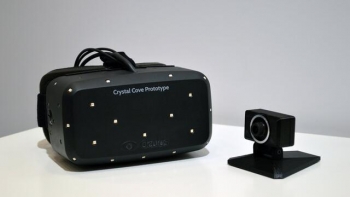 The Oculus Rift, a virtual reality headset currently in development by Oculus VR, has received a number of hardware updates for its latest showing at this year’s CES conference.

The new development model, dubbed the Crystal Cove now features an external camera that allows the Rift to track the position of the user in relation to the system.

This allows users to lean closer to objects in virtual worlds for a better view, as well as being able to peer around corners and other objects for a much more realistic experience.

Previously, the Rift would only register where the user was looking and not the position of the users head in relation to their body.

In addition to the external camera, the headset now features a 1080p OLED display and significant improvements in reducing motion blur.

While we all appreciate a clearer display, the latter of these is of particular note to those following the development of the system, as many early users of the Oculus Rift have complained of motion sickness caused by the significant amount of motion blur in older models.

Oculus Rift came into existence after a highly successful Kickstarter campaign which raised $2.4 Million for the virtual reality company. Since then, the system has gone on to receive a further $91 Million in backing.

The Oculus Rift is still only available as a development kit at this stage, and still requires a design overhaul and some feature tweaks before it could see a commercial release, however these new improvements are a step in the right direction that could eventually see the system changing the face of gaming.

It is speculated that we can expect to see a consumer model released towards late 2014 or early 2015.

More in this category: « Sony inks 4K deal with Netflix Call Of Duty Championship qualifiers Australia and New Zealand »
Share News tips for the iTWire Journalists? Your tip will be anonymous