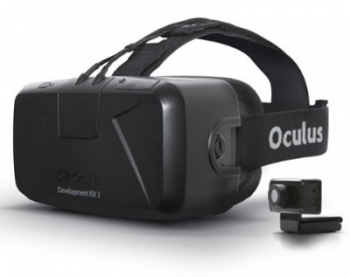 The Oculus team is answering its rivals with the second Rift developers' kit available to the public from today.

Developers can shell out $350 for the next version of the Oculus Rift, available today from the Oculus Web site, with an expected ship date sometime in July.

Oculus announced the device at San Francisco's Game Developer's Conference, and said many of the headset's features are ready for the average gamer, including "key technical breakthroughs" such as "low-persistence, high-definition display and precise, low-latency positional head tracking."

Unlike its predecessor the DK2 boasts a low-persistence OLED in a bid to wipe out simulator sickness, and comes equipped with a high-definition 960x1,080 per-eye display for improved clarity, color, and contrast.

Despite the improvements, Oculus said the "overall experience" is still lacking, and not yet ready for gamers.

"DK2 is not the Holodeck yet, but it's a major step in the right direction," the company said.

Check out the announcement video below, and look out for more announcements from the GDC, which runs until 21 March.

More in this category: « Music sales down, but streaming way up Next generation only: Assassin’s Creed Unity sneak peak »
Share News tips for the iTWire Journalists? Your tip will be anonymous