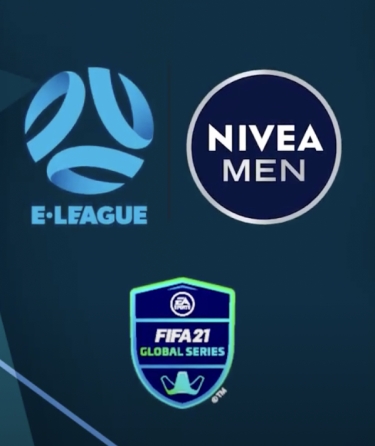 With esports the world’s fastest growing spectator sport, Australia’s E-League has a new sponsor, the return of a host of World Cup stars, the defending Premiers and the promise of an intense new format.

Promising to be “the ultimate festival of EA SPORTSTM FIFA21 across Australia”, the NIVEA Men E-League is back, with NIVEA Men the new sponsor.

With 2019 the FIFAe World Cup having seen more than 47million viewers across online platforms, it grew in 2020 with the FIFA21 Challenge becoming EA Sports’ “most watched esports event, with an average minute audience of more than 254,000 and a total watch time of more than 1 million hours.”

We’re told: “over two high-octane days in April, some of Australia’s best-known EA SPORTSTM FIFA21 competitors will vie to call their clubs champions across both PlayStation 4 and Xbox One.

“Newcomers Macarthur FC join for the first time, and two winners of the tournament will enter the EA SPORTSTM FIFA21 Oceania Regional Playoff which serves as a direct qualifier for the FIFAe World Cup.”

There’s also the promise of a high-profile commentary line-up featuring YouTube stars JarradHD and TheMasterBucks and esports analyst Nate Patrick and Treaders will bring viewers all the action on the free streaming platform Twitch.

The eleven-round tournament over the two days will see competitors playing from their own homes for the first time because of COVID-19 restrictions and in line with EA SPORTS FIFA 21 Global Series tournament guidelines.

The NIVEA Men #ELeague kicks off this Friday ? pic.twitter.com/DpqFJv8GEq

“We are really excited to bring the NIVEA Men E-League back for our fans because we know they love football 24/7 and esports is a big part of that,” said APL chief commercial officer Ant Hearne.

“The new format is designed to be super-competitive, especially when we have some of Australia’s top players involved and more teams taking part.

“The numbers show that around the world esports is the fastest growing spectator sport - our fans connect with football in all different aspects of their lives, and we know that gaming is a key part of that.”

Here’s a video of the event’s best moments from the past: