It's International Pet Day tomorrow (on 11 April) and with Aussies loving their pets more than ever, Netflix's new survey talks a walk on the wild side and shows pets and TV go together in weird and wonderful ways.

Netflix has released a howler of a press release and new study today, and starts off by stating that "It’s no secret that the world’s love of pets has reached epic heights!"

Leading with a "Ruff! Meow!" and a "Tweet!", we're not delving into the depths of Twitter, nor are we paying a visit to the Bondi Vet, but we are told that those epic pet highs mean we now take "cat cafes in Melbourne and Sydney" for granted, while one Aussie lady "keeps pet crocs in ya backyard!".

Thus we are told that "it comes as no surprise that our four legged doggos, kitties and budgies have infiltrated our entertainment habits as well", and that Netflix's new survey shows that "when it comes to watching TV, most Aussies (59%) find pets to be the best binge partner", and asks whether we can believe it or not!

Netflix has released its study on pets and TV, with an infographic below showing some of the stats surrounding this slightly suspect survey, but let's be real, Netflix has been barking up the right tree so often with all of its decisions, this one surely will throw the cat amongst the pigeons of believability while raining cats and dogs loads of stats for us to ponder.

The company says that "work or school can be a bit of dog’s breakfast and sometimes you want to come home and cark it in front of your screen to have some downtime with Netflix", but what happens "when your viewing buddy spoils the show or cheats on you?"

For an overview of how Aussies watch Netflix with their pets, here are a few stats which can give you an idea of the obsession, with that full infographic below, too.

Netflix ends by saying: "So wag school with ya doggo, claw your way out of work with your kitty, and smuggle ya budgie to your couch, because clearly Australia has decided... Netflixing is so much better with a (wo)man’s best friend!"

Sounds like a pretty legit shaggy dog story to me – just as long as you remember that Netflix and Chill means one thing with humans, and now joined by "Netflix and Woof" as the infographic below shows, but with clearly a completely different and totally innocent relaxation TV watching thing with your pets!

A Netflix video will be uploaded here soon too, below the infographic. 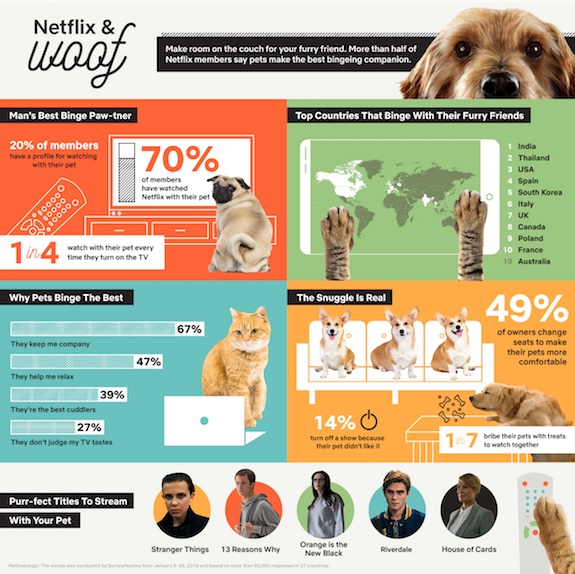