Hey you, Fetch TV users, hayu has launched on Fetch 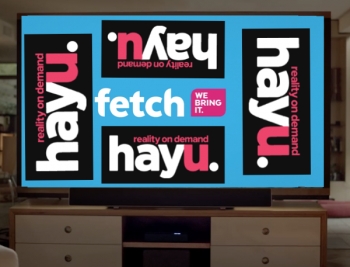 NBC International’s SVOD competitor and reality TV service, hayu, has already launched for some Fetch subscribers, and will be rolling out to all boxes in the coming weeks.

Of course, it’s not a free addition, as such, but you can take advantage of a “special introductory offer” wherein Fetch customers can “access a two-month free trial of hayu when they sign up at Hayu’s Fetch site here hayu.com/fetch before 30 September 2017".

Thereafter, Fetch customers who decide to subscribe to hayu for $5.99 per month can access what hayu describes as its “binge-worthy reality shows directly from the Fetch ‘Apps’ menu.”

hayu is for those who can’t get enough of reality TV, even though they live in their own personal and exclusive reality experience.

Clearly, living vicariously through over “150 of the best, must-see reality shows on-demand, with the majority of US shows debuting on the service the same day as their US launch” is more fascinating, more interesting and more exciting than living one’s own life, but that must be the reality for more than enough people to profitably sustain the hayu service.

So, what kind of realistic escapism can you expect from hayu on Fetch?

Well, it’s exactly the same as the shows on hayu.com, except you can watch them via the convenience of your Fetch TV box.

We are told that “Fetch subscribers will now be able to enjoy the full range of The Real Housewives franchise, every episode of everything Kardashian and the international hit, Top Chef".

Realistically, hayu also delivers what it says is “the enormously popular Made In Chelsea (exclusive to hayu in Australia), along with great throw-back favourites like The Hills and Laguna Beach".

Want even more artificial realism? Then you’ll be pleased to know that “reality fans can also catch the much-anticipated new series Life of Kylie premiering on 7 August 2017 on hayu – immediately after its US launch.”

Naturally, Fetch TV are pretty chuffed, too, noting that “the addition of hayu is the latest evolution in the range of content available on Fetch".

Scott Lorson, with the much shorter but more impressive title of chief executive at Fetch TV, said: “Some of our most-watched shows are reality TV, so we’re thrilled to be able to offer Fetch subscribers access to the hayu on-demand reality service.

“hayu delivers a huge range of great content including The Real Housewives franchise, which we know will be very popular with our base. Fetch now carries six linear channels from NBCUniversal International, and we’re pleased to further cement our relationship with the addition of the hayu app.

“Fetch continues to expand our content offering, as we live up to our brand promise of ‘All your entertainment in one place',” Lorsen added.