With the biggest daily VPM or "video player measurement" audience for 2019 across Australian television, and with Foxtel's linear viewing smashing previous season openers, GOT isn't just coming but has arrived at long last.

Foxtel reports that the premiere episode of the final season of Game of Thrones "has shattered records as viewers flocked to watch what has been lauded as the most highly anticipated television premiere of all time".

We're told that the Game of Thrones season opener, titled, ‘Winterfell’ marked "the triumphant return of the worldwide television phenomenon, which streamed exclusively on Foxtel Now and aired on the FOX SHOWCASE channel yesterday in a global television simulcast.

"The day one episode reached an overnight linear audience across all airings of 962,000 viewers marking an increase of 17 percent on the season seven premiere in 2017. Foxtel anticipates continued record breaking performance once the consolidated data becomes available."

"The first episode also delivered an additional total premiere day audience of 333,000 who streamed it live or On Demand across Foxtel Now and Foxtel GO – the biggest daily VPM audience for 2019.

"The epic six-episode final season of HBO’s global TV sensation will bring about the show’s stunning conclusion, as viewers are transported back to Westeros, where White Walkers, and the army of the dead, led by the dreaded Night King, have broken through the fabled Wall and started their deadly march on the Seven Kingdoms."

Brian Walsh, Foxtel’s executive director of Television, said, “The Wall may have fallen but last night’s ratings have rocketed Game of Thrones higher than ever as Australia joined the rest of the world in watching this global television event in numbers never before seen on Foxtel.

"Yesterday’s viewership is a testament to the hunger that fans have had over the past two years for the return of the unrivalled action, drama and intrigue that only Game of Thrones can deliver and we are thrilled with the result. Frankly there is no other show like it. It is the television series of a generation.

“On Demand streaming of all past seasons of Game of Thrones on FOX SHOWCASE was higher than ever as fans binged in anticipation of the season premiere and we fully expect today’s record breaking numbers to grow as even more customers continue watch encore screenings and relive the action On Demand,” Walsh concluded.

Over the past seven seasons, Foxtel needlessly reminds us that "Game of Thrones has become a cultural phenomenon, attracting record viewers and critical acclaim worldwide. The show also stands as the most Emmy Award-winning primetime scripted series ever, with a record 47 awards.

"Every Monday, for the duration of Game of Thrones’ finale season, Foxtel is streaming Thrones 360 LIVE, where the hugely talented former Channel [V] and Australian Idol host James Mathison and rising media star Stephanie ‘Hex’ Bendixsen, will join a live audience at Foxtel studios to recap that day’s Game of Thrones episode, alongside celebrity guests and some of the country’s most die-hard Game of Thrones experts. Thrones 360 LIVE streams Mondays at 9:30pm on FOX SHOWCASE and FOX.

"Game of Thrones and HBO are exclusive to Foxtel in Australia." 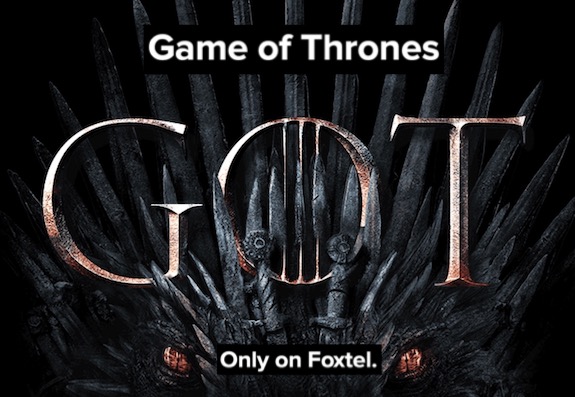