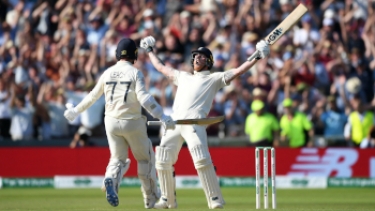 Ben Stokes rejoices after guiding England to victory in the third Test of the Ashes last year to level the series 1-1. Stokes will captain England against the West Indies. Supplied

Live international cricket will return to Spark Sport with a four-year deal for exclusive coverage of all international and domestic cricket matches played in England under the England and Wales Cricket Board.

A statement from Spark said the coverage would begin on Wednesday with coverage of the England-West Indies Test series with the start set for 10pm New Zealand time (8pm AEDT).

This series has been christened #raisethebat series and involves three Tests in three weeks; it will pay tribute to key personnel who have helped during the COVID-19 pandemic.

Other tournaments to be covered under the deal are those played under the ECB banner, including all men's and women's home internationals, the County Championship, the Vitality Blast, the Royal London Cup and The Hundred which has attracted a big audience from the cricketing world.

Spark Sport chief Jeff Latch said customers could now enjoy compelling year-round cricket coverage with the securing of rights for the New Zealand Summer of Cricket for the next six summers.

"England has a rich cricket history and the fan base is engaged from grassroots right through to the professional level so it's great to know that Spark Sport will play a pivotal role in growing the game as a key delivery partner in New Zealand," he said.

"England's staunch New Zealand fan base can look forward to scheduled future international events of the deal, including India's five-Test Tour in 2021 and a bumper 2022 summer with Test tours by South Africa and New Zealand. This will be the Black Caps first Test series in England since 2015."

ECB chief commercial officer Tony Singh said: "This is a great partnership for cricket fans in New Zealand, and we hope viewers will enjoy watching the first international Test cricket to be played since the COVID-19 outbreak with next week's #raisethebat series between England and the West Indies.

"This deal means fans will also be able to see some of the world's biggest stars and coaches in the unmissable first season of The Hundred, our action-packed new 100-ball cricket competition which launches next year, and New Zealand's tour of England in 2022.

"We're excited to be working with Spark Sport as it pioneers a fresh approach to sports delivery in New Zealand."

Spark said the new content would be available as part of the standard monthly subscription of NZ$19.99, with new customers able to sign up for a seven-day free trial.

More in this category: « Spark picks Whisper as six-year production partner for NZ cricket Optus Sport offers its full range through LG Smart TV app »
BACK TO HOME PAGE
back to top