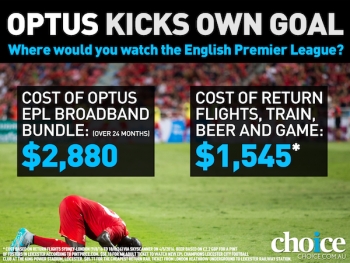 Suggesting its cheaper to fly to the UK to watch a single Premier League game than it is to subscribe to the Optus EPL 24-month bundle, Choice says Optus puts football fans offside.

Choice is Australia’s consumer advocacy group, long in the business of crunching numbers and certain wayward fire-prone Samsung washing machine models, with its Director of Campaigns and Communications, Matt Levey stating: “Choosing which phone or broadband provider best meets your needs should be a totally independent decision to choosing which content you buy.

“Optus has bungled its bundle by forcing Aussie football fans to become an Optus phone or broadband customer to watch next season’s English Premier League broadcast.

“With the cheapest Optus broadband bundle that gives you access to next season’s EPL costing you $2,880 over 24 months, it would be much cheaper to:

Levey added: “When you consider it would cost you $1,544.15 to be at the ground to watch EPL champions Leicester City FC play their first game of a new season, forking out an additional $1,335.85 to Optus watch the game at home doesn’t seem worth it.”

Choice says ‘broadband bundles to watch the EPL through Optus start at $2,880 and include home broadband, mobile phone plan, mini set top box and actually paying for the EPL. By avoiding the Optus bundle and taking out a separate broadband contract with a month-to-month SIM-only Optus mobile plan, the consumer would still be up for $900 for a 6-month contract or $1,350 over a 9-month season.’

Levey continued: “This move by Optus will undoubtedly see many consumers using virtual private networks (VPN) to access the Premier league from other countries where it doesn’t require changing your phone or broadband provider – like New Zealand or Taiwan.

“In fact the current EPL season is available in New Zealand for $91, streaming every match on any device in full HD - based on details at the Premier League Pass website here.

Levey concluded: “Telcos need to realise that the days of locking Australians out of the international market for content are over. It they over charge, consumers will seek out more competitive prices overseas.”

More in this category: « You call that a screen – this is a screen! Presto commissions two more ‘Home and Away’ special events »
Share News tips for the iTWire Journalists? Your tip will be anonymous