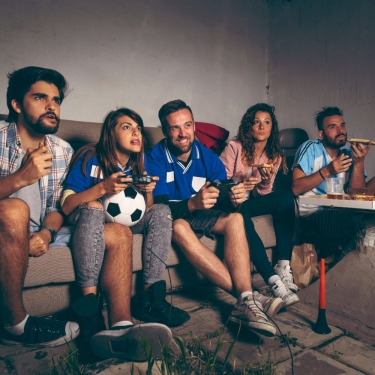 Social distancing and stay-home restrictions have brought about a boom in the number of Australians playing video games, with 762,000 new gamers getting into gaming during the COVID-19 pandemic crisis, according to a new survey.

More than five months after Australians and people all around the world were first encouraged to socially distance, the survey on people’s behaviours and attitudes to gaming during the COVID-19 pandemic by Dell Technologies gaming subsidiary, Alienware, reveals that while more than half (55%) of Aussies played video games before the stay-home restrictions - gaming has increased in popularity during social distancing and is regarded as a safe and sociable activity for the majority of Australians.

The research surveyed more than 1,000 Australians over the age of 18, exploring the changing habits and sentiment around gaming, and found that because of its ability to connect people through a common cause or activity, gaming is an “ideal outlet for many during this time and has been acknowledged as a healthy means of physical distancing and social connection amid the pandemic”.

The survey also found gaming has had a positive impact in helping to manage mental health and relieve the isolation felt during social distancing.

“Recent months have shown us that people all over Australia have been turning to gaming to find a genuine connection and sense of community,” said Ben Jackson, general manager – Consumer and Small Business, Dell Technologies ANZ. “Its ability to connect, entertain and educate means gaming is now a mainstream activity for a community that is becoming more diverse and widespread every day.”

Alienware points out that last year, IGEA’s Digital Australia report found that the local gaming community was becoming more diverse than ever before.

“The Alienware Gaming and Social Distancing Survey supports this and goes further, suggesting more than three quarters of a million new video game players have joined the local community since the start of social distancing,” Alienware notes.

“This proportion is four per cent of the Australian population, meaning that 762,000 new video game players have been created in the last few months,” Alienware said.

“It’s exciting to welcome so many new gamers to the local community and to have a fun activity that not only entertains but also supports them during these times,” says Jackson.

“The survey finds that 44% of Aussie gamers consider gaming to have a positive impact on their community, which is something those of us in the industry have known to be true for some time.

“Our previous research in the 2018 State of Gaming Survey showed that almost 30 per cent of gamers in ANZ had made new friends through gaming and almost a quarter had become closer to their real-life friends. Two years, this latest research proves this sentiment still holds true and is even more important during social distancing.”

Alienware says that Australians, like many others around the world, have been social distancing for six months, in an effort to flatten the curve and, while this time apart is “necessary to protect ourselves and others, not having enough social connection can seriously affect our wellbeing.

“In fact, among gamers more than three quarters (78%) of respondents claimed gaming was a positive outlet for them during social distancing, while more than half (59%) said the social element of gaming has helped with their overall wellbeing.

“Overall, the majority of Australians (57%) claimed gaming was a positive outlet for them during stay-home restrictions, with two in five saying gaming helped keep their mind active (42%) and relieve stress (41%) while at home.”

Alienware says the ability of gaming to bring people together is a key driver of the positive sentiment for gaming during social distancing.

“We found that the majority of Australians consider gaming to be ‘social’ or a social activity, and it is this sense of a sociable community that brings people together and unifies them at a time such as this,” says Jackson.

“The gaming community provides a way for people to come together and form genuine connections and, in recent months, this has become more important and valuable than just playing for fun or ‘playing to win’.”

Alienware also notes that Jackson’s comments are supported by the survey results, which found that half (50%) of Australians believe playing to socialise is as important or more important than the actual game play.

“The survey also found that 44% of video game players personally use video games to socialise and stay connected with friends and family, while a fifth of all respondents (20%) said gaming helped them connect with friends during social distancing.

“For gamers, the sense of camaraderie is important to sustain relationships with both their online and in-person communities, with two in five (39%) regularly playing online with their real-life friends during social distancing.

Alienware says that as well as being a vital tool in keeping friendships together over the last few months, the Gaming and Social Distancing Survey found gaming was also an important tool for engaging families, with the survey finding that 13% of Aussies saying gaming helped them connect with family, suggesting that more than 2.5 million people were brought together with their families by gaming during social distancing.

“This is not the only relevant finding to the family unit. In fact, the survey discovered Australian parents’ attitudes to gaming has undergone a transformation since social distancing began, with almost three quarters (73%) stating they see video games as a safe, social activity for their child to connect with friends during social distancing,” Alienware says.

“These figures are even higher among parents who already identified as gamers, with 87% saying video games can be useful for educating their children, and 85% who say video games are a safe social activity for their child to connect with friends.

“Gaming is an interactive and educational source of entertainment that can engage kids and families while in isolation,” said Jackson.

“Half of the respondents stated they have always thought video games have an educational element and recognise that it’s more than just ‘playtime’. We know from our previous research gaming can help us become more strategic thinkers, improve hand-eye coordination and increase reaction times. Some even stated that gaming can help improve their teamwork and leadership skills, which can be beneficial to gamers in other aspects of life.”

According to the Alienware survey, as well as helping children stay in touch with their friends, gaming is bringing Australian families together in the home.

The survey reveas tha more than two in five (44%) parents and caregivers say that because of the stay-home restrictions they now play online games with their kids and 43% said their children have taught them how to play a video game.

“The pandemic has shifted our attitude to many things, and our use of technology and the value of games to engage and connect communities is one of them,” said Jocelyn Brewer, Registered psychologist and cyberpsychology researcher.

“While many have felt the effects of being ‘Zoom’ed out’ and the drain of video conferencing fatigue, video gaming has provided energising and stress relieving ways for people to manage the ‘new normal’, Brewer said.

“The stereotype of a gamer has shifted over the last several years to become much more mainstream and the opportunity of games to occupy our minds, manage stress and uncertainty while helping to ‘flatten the curve’ has accelerated this.

“With more mature audiences increasingly taking up technology, they’re also discovering the power of games to help bridge face-to-face connections and maintain cognitive function with a range of strategy games.

“Video gaming is a platform that can help provide social glue and shared experiences across generations, with more active engagement than simply video calling Nanna and Gramps. The divide is closing between the digital natives and those new to the digital community as adults build confidence to explore online space and play games.”

Brewer also says that “families too have taken a deeper dive into the online gaming worlds, with more parents becoming involved in gaming to share in the fun”.

“ Rather than battling against games, parents have joined in with some of the in-game skirmishes and built a new appreciation of the skills involved in game play.

“Building a better understanding of online worlds can help strengthen key aspects of the parent-child relationship: trust, respect and authentic connection. When these are strong, young people feel more confident to approach their parents to seek help and advice on things that matter,” Brewer concluded.

More in this category: « Western Digital releases three new devices aimed at gaming market How to watch and stream the 2020 Melbourne Cup live and free online »
Share News tips for the iTWire Journalists? Your tip will be anonymous