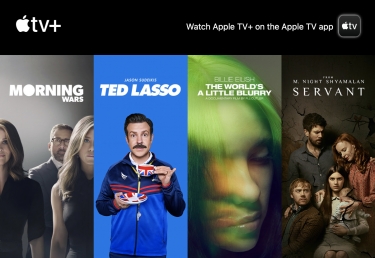 If you're an Apple TV+ subscriber, Apple has announced to you by email that you're getting the equivalent of a month's worth of credit, each month, until June, in a competitive move that is obviously designed to keep people connected with their Apple TV+ subscriptions.

If you purchased a qualifying new Apple device over more than the last year or so, you have probably been enjoying Apple TV+, free of charge, in what has been an extended Apple trial.

Apple's library of TV shows and movies has been a lot smaller than what you'll find on Netflix, Stan, Amazon Prime, Disney+ and other services, but Apple has been making some very high quality content, and its library has been growing, with some real hits like Ted Lasso and the award winning "The Morning Show".

In what seems obviously a way to keep existing subscribers connected to the service, and presumably to entice them into watching more Apple TV+ content, Apple says users are "getting $7.99/month in credit from Apple TV+ through June."

Now, that's The Australian monthly price, those in the US are paying $4.99 per month and so are getting that as their credited amount, and in other countries where Apple TV+ is available, the amount will be the equivalent in that country's local currency.

Apple's email to subscribers continues, stating: "We’re applying $7.99 in credit to your Apple ID each month you’re subscribed from February through June to keep enjoying Apple Original shows and movies. That’s it — no further action is required."

Apple's appeal to subscribers to watch and enjoy the content on offer - and coming soon - is what we read next in the email, which states: "With Morning Wars’ Emmy win and Ted Lasso hailed as 2020’s best comedy, Apple TV+ has set a new bar for quality storytelling. Dive into new seasons of M. Night Shyamalan’s Servant, Peabody-winning Dickinson, and more critically acclaimed series returning this year.

"Also, look out for premieres of Apple Original Films — including Palmer, a moving drama starring Justin Timberlake, and Billie Eilish: The World’s A Little Blurry — as well as new adventures in The Snoopy Show."

Apple also reminds us of the breadth and depth of devices that are able to play Apple TV+ content when it states: "And now you can watch Apple TV+ on even more screens — find the Apple TV app on iPhone, iPad, Mac, and Apple TV, or download the app on select Roku, Amazon Fire TV, Samsung, LG, VIZIO, Sony, PlayStation, and Xbox devices. Learn more about how to watch Apple TV+."

The email concludes after the following sentence with a "Keep Watching" button, with that preceding sentence being: "Your credit will be automatically applied to your Apple ID each month you’ve been charged for the service from February through June."

It ends with a note that the message is from "The Apple TV+ Team".

So, while Apple hasn't yet purchased the entire Disney company as it could, in theory, do, the company continues with a lot of great Apple TV+ content to come, with one of the most anticipated productions, at least for sci-fi fans, being Isaac Asimov's Foundation series, adapted to TV for the first time despite years of attempts that previously never went anywhere.

I'd also wholeheartedly recommend watching the Ted Lasso TV show, which only has one season at the moment, but whose second series is on the way. It's a real gem of a TV show, and should definitely be on your must watch list!

Until then, if you have access to Apple TV+ and haven't tried it yet, or haven't been back in a while, it's definitely worth checking out the service again to see what's new, with some great content already there and more on the way.