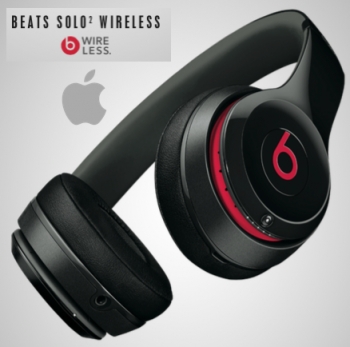 The Solo2 wireless on-ear headphones by Beats are now available in Australia via the Apple Online Store now and from Apple retail stores early April.

Although Beats by Dr. Dre launched its new Solo2 on-ear wireless headphones in November 2014 in the US, with some savvy Beats fans presumably already having imported them, they have finally landed in Australia on an official retail basis.

However, once you take currency conversions into account and add the sales tax most US states charge on top of the sticker price, you find that A$399.95 equates to US$315.62 at time of publication.

Thus, despite inevitable cries to come from some sections of the media to the contrary, Australians don't appear to be being gouged but are simply paying the price of a weaker Australian dollar which you’d have to pay even if you were in the US and converted your Aussie dollars across to greenbacks over there.

Unsurprisingly, Beats notes its focus on ‘sound, quality, design and usability’ with products that enhance its customers ‘lifestyle and music experience’, and says it ‘continues to innovate in the Bluetooth market and to expand its offering of exceptional wireless products.’

The company’s president, Luke Wood said: “We’re taking one of the most popular headphones in the world and adding wireless Bluetooth functionality to it. The Solo2 is already a world-class headphone much lauded for its acoustics, and now it joins our growing family of successful wireless products."

In the US, Beats said it grew its wireless headphone business 172% YoY January-September 2014 while quoting NPD Group’s Retail Tracking Service to this effect for good measure, and says its Solo model is the #1 headphone in the market - again quoting the same NPD Group stats.

Following on from the successful Solo2 with its dynamic sound and streamlined design, Solo2 Wireless adds the benefits of Bluetooth wireless technology which lets you move freely for up to 9 metres from your Bluetooth capable audio device.

Naturally, it’s not just a pair of headphones, but has a built-in microphone, too, so while you can skip songs and change the volume using the ‘b’ beats logo button and the volume buttons on the ear cup, you can also take phone calls when paired to a smartphone as desired.

Although some competing wireless headphones are starting to offer 20+ hours of battery life, Solo2 Wireless still offers a respectable ‘up to’ 12 hours of wireless playback, and if the device isn’t charge, you can plug the ‘RemoteTalk’ cable into the Solo2 and the other end into your 3.5mm-equipped audio device to keep on listening.

Beats places a premium on sound and design, which were no doubt two of the factors Apple looked at when deciding to acquire Beats - in addition to its streaming service, and of course the talents of Beats founders Dr. Dre and Jimmy Iovine.

The company boasts ‘fine-tuned acoustics for clarity, breath and balance’ and says Solo2 Wireless ‘delivers a complete listening experience. Regardless of the kind of music you’re into, its dynamic and wide range of sound will bring you closer to what the artist intended you to hear.’

When it comes to design, Beats against boasts of Solo2 Wireless’ ‘fast flowing curves and no visible screws’ paired with its ‘sleek, streamlined aesthetic’.

In addition, the frame of the headphones has an ‘innovative curve’ starting at the centre of the flexible headband, which Beats says gives Solo2 Wireless owners ‘a custom-fit feeling’.

Then there are the ‘ergonomically angled ear cups’ which pivot to complete ‘this natural fit and provide optimal comfort and sound delivery.’

The product page for the Solo2 Wireless at the Apple Australia’s online store is here while retail availability through local retail Apple Stores starts in early April.