The rise of the ‘hybrid job’ 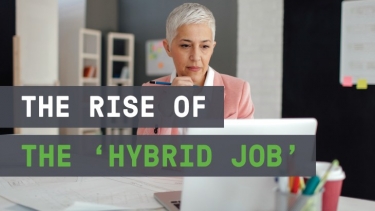 SPONSORED NEWS: The most in demand and highest paying jobs of the future will likely be hybridised, requiring those that fill them to possess skills across multiple disciplines, according to recent research by Burning Glass Technologies (Burning Glass).

The research states ‘hybrid jobs’ are predominantly the result of rapid digitalisation – with job characteristics that are complex and multi-disciplinary. For example, once considered highly technical jobs, IT jobs now require a mix of multi-disciplinary skills such as writing, problem-solving, creative and research skills, and skills in teamwork and collaboration.

An analysis of almost one billion job postings and applications by Burning Glass revealed that hybridisation is on the rise – with hybrid roles projected to grow at a rate twice as fast as overall jobs in the next decade. The increased hybridisation of roles is set to transform the job market, and will impact the type of roles and type of talent that organisations will need to remain competitive.

How will hybrid jobs transform the job market?

As the rate of hybridisation increases, it is important for organisations to understand the implications on the wider employment market. While the majority of jobs aren’t yet significantly hybridised, hybrid jobs already represent the fastest growing and highest paying segments of the job market. In fact, the introduction of just a single skill to an employee’s skill set has the potential to increase their salary by 40%.

Hybrid jobs are also rarely repetitive, and despite encompassing some of the most technology and data driven roles, they are among some of the most dependant on humans – with a large emphasis on creativity and judgement. For this reason, hybrid roles are typically less susceptible to automation, contributing to the demand for employees who can perform them well.

While this is all good news for professionals and organisations who have adapted to the need for hybrid skills, it has the potential to exacerbate a divide in the workforce for those who fail to keep up.

Most in demand skill sets for hybrid jobs

The research identified five key skill sets that are most commonly in demand across hybrid roles:

While not all of these skills are new, they are all reinventing existing roles and forging the creation of new roles. As such, professionals who possess these skills will be highly valued and sought after.

Challenges of the hybrid job economy

Although the emergence of hybrid jobs has undoubtedly increased innovation and efficiencies for organisations, it has also presented some challenges. Because the combined skill sets needed in hybridised roles are often learnt over the course of an employee’s career, there are less entry level opportunities for hybrid jobs.

In fact, Burning Glass identified that only 16% of highly hybridised roles advertised were entry level – meaning that organisations could miss out on the opportunity to engage with and shape talent early on in their careers.

Hybrid roles can also be harder to fill than segmented roles because the number of candidates that possess multi-disciplinary skill sets is often much smaller. To combat this, partnering with a talent specialist such as Paxus can facilitate hiring for these hybrid skills.

As Australia’s leading supplier of tech and digital talent, we are experts in sourcing for niche roles and hard to find skill sets. With market leading insights, we can also help your organisation to anticipate future trends and needs when hiring for hybrid roles.

More in this category: « DDLS delivering training for New Horizons in Australia
back to top