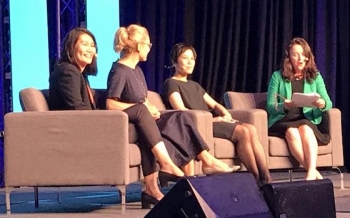 A panel session at the recent Tibco Now 2019 conference looked at some of the issues surrounding diversity in IT.

Diversity is basically about "embracing people who are not like you", said DBS Bank managing director, group head of consumer banking and big data/AI technology, Soh Siew Choo.

Diversity is often thought about in terms of gender, ethnicity and possibly sexuality, but according to She Loves Data and Meiro chief executive and co-founder Jana Zizkova, "there are a lot of different attributes... gender is just one."

For example, she has a team of data analysts that is 100% female, yet those employees come from very diverse backgrounds in terms of nationality, education, career background, and so on.

Increasing gender diversity does help generate different ideas, said Zizkova, but so does variation in age, experiences and industry background.

"If you make an effort [to improve the number of women in technology], you will definitely see the result" in an increased rate of innovation, said Soh.

Loh opined that the system is not biased against women or men, but parents and teachers do influence the study and career choices made by young people, so it would be better if students were helped to identify and act upon their individual strengths and passions.

Asked by Tibco Asia Pacific vice-president and general manager Melissa Ries to suggest ways of increasing diversity at work, Soh had a simple answer: start hiring people who are very different to you.

"It's important to start with the hiring [process]," agreed Zizkova. There is a shortage of data analysts and data scientists, so organisations need to review their hiring practices. They should also look at factors that may affect employee retention, including flexible hours, parental leave, and the option of working from home.

Given Amazon's experience that applying machine learning to recruitment tends to reinforce the existing lack of diversity, iTWire asked Ries how it might be possible to overcome this problem, given that until recently considerable weight has been given to the idea that a successful candidate should "fit in" (ie, be similar to other people in the work group) rather than seeing difference as a virtue.

Without addressing the technical issues, Reis said it was important to use diverse teams when building AI systems, and that organisations need to develop an environment and culture that supports diversity.

Organisations that embrace AI get returns that elude those who only dabble, and the same goes for diversity, she suggested.

A diverse workforce has been shown to have a positive effect, Ries said, so organisations need to decide what they want and what they are going to do about it.

Disclosure: The writer attended Tibco Now 2019 as a guest of the company.

More in this category: « Higher salaries on offer from IT employers to attract top talent, says recruiter Technology, science sectors see ‘modest growth’ in job ads: report »
back to top