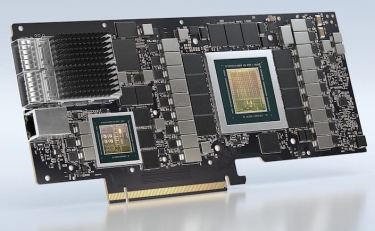 Nvidia's GTC conference may be virtual this year, but that hasn't stopped the company making several real announcements.

Data centre. Following last week's joint announcement with VMware about the use of DPUs in the data centre, Nvidia has made three more announcements involving its BlueField DPUs.

Firstly, the BlueField family has been expanded with the introduction of the BlueField-2X, which combines "all the key features" of the BlueField-2 with an Nvidia Ampere GPU. Using a PCIe Gen 4 interconnect, the GPU can be employed to add AI functionality to data centre security, networking and storage tasks.

Another possibility is to use video analytics to block inappropriate content at the time it is uploaded.

BlueField-2X GPUs are under development and are expected to ship during 2021.

Secondly, Nvidia has announced the availability (but only to early access partners at this time) of the DOCA SDK. Just as Nvidia's CUDA helps developers build GPU-accelerated applications, DOCA helps them build applications on DPU-accelerated data centre infrastructure services.

Nvidia intends to continue making DPUs without GPUs for customers who do not need the AI functionality.

"The DPU applies to every workload," said Nvidia head of enterprise computing Manuvir Das, predicting it will be a part of all data centre servers in the future.

Edge AI. The large and growing number of IoT devices means there is a pressing need to apply AI at the edge, observed Nvidia vice president and general manager of edge computing Deepu Talla.

So the EGX range will expand to include a card that combines Ampere GPU and BlueField-2 DPU capabilities on one PCIe card.

To help deploy and manage EGX servers, Nvidia has announced Fleet Command, a hybrid cloud platform that centralises the management of servers spread across vast areas. 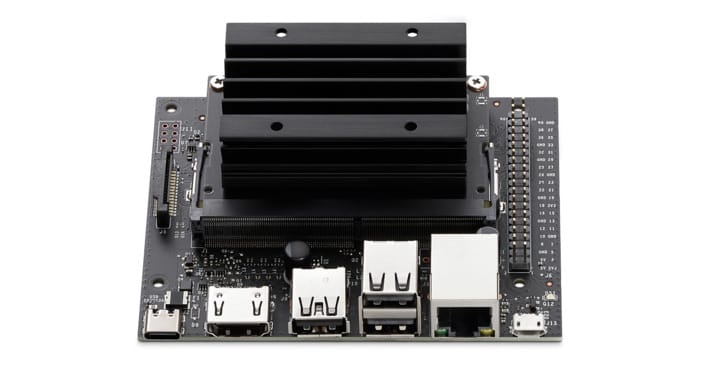 Priced at just US$59, the Nano 2GB is "the ultimate AI robotics starter kit," according to the company. The main differences are that it has half as much RAM as the original version, one camera port instead of two, and three rather than four USB ports. But it is still supported by the JetPack SDK and the Cuda-X stack.

It is expected to appeal to individual developers and secondary and tertiary students who want to learn about AI, said Talia.

Jetson Nano 2GB will ship at the end of October.

Originally conceived as a way to support internal collaboration, Omniverse can be used by individuals to integrate the diverse tools they use (eg, Blender, SketchUp) as well as Nvidia technologies such as AI Pose and Audio2Face to generate photorealistic images in real time.

It also allows the use of those same tools and technologies in a collaborative space. So architects, animators or engineers can work together on 3D models just as easily as people can co-edit a document or spreadsheet. 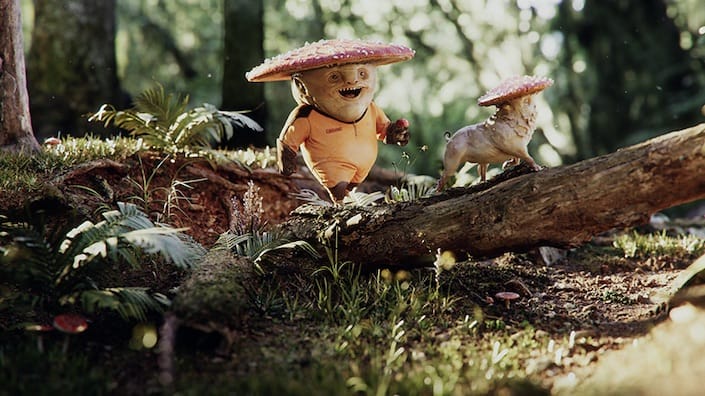 "Omniverse gives teams of creators spread around the world or just working from home the ability to collaborate on a single design as easily as editing a document. This is the beginning of the Star Trek Holodeck, realised at last."

The bandwidth reduction is achieved by analysing the key facial points of each person and then intelligently re-animating the faces in the video on the other side of the call.

The work is done on GPUs in the cloud, so users do not need special hardware.

"We're really proud to be launching it," said Nvidia head of worldwide developer relations and general manager of media and entertainment Richard Kerris. 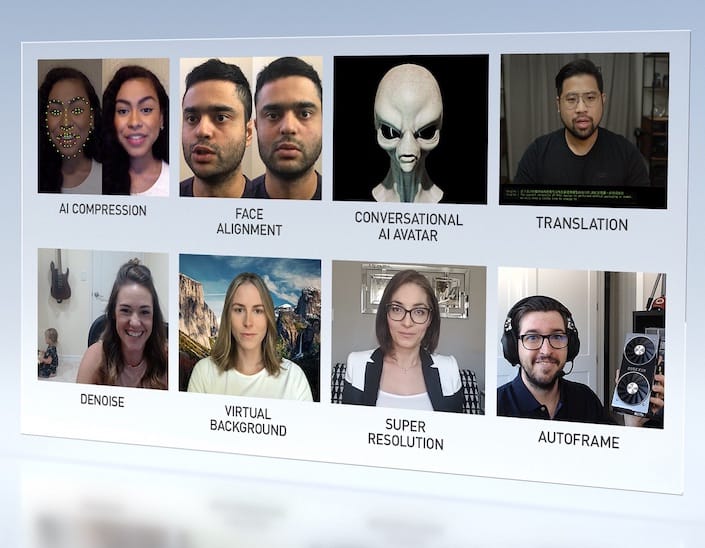 Available immediately, it combines accelerated computing, AI (including deep learning) and natural language processing with the aim of improving the efficiency of drug discovery.

The natural language capabilities provided by Nvidia's BioMegatron are "transformative," she said, as the language model is able to extract information from scientific literature and electronic health records.

Healthcare company GSK and Nvidia have established an AI hub in London to apply the technology to design and develop medicines and vaccines.

"Because of the massive size of the datasets we use for drug discovery, we need to push the boundaries of hardware and develop new machine learning software," said GSK senior vice president and global head of AI and ML Kim Branson.

"We're building new algorithms and approaches in addition to bringing together the best minds at the intersection of medicine, genetics and artificial intelligence in the U.K.'s rich ecosystem. This new partnership with NVIDIA will also contribute additional computational power and state-of-the-art AI technology.

Nvidia's Cambridge-1 supercomputer, based on the DGX SuperPod, is being built in London. It would be number 29 on the current Top500 list, and in the top three of the Green500 thanks to its 80 DGX A100s giving 400 AI petaflops. Nvidia is investing around £40 million in Cambridge-1, which will be part of the company's already-announced AI Centre of Excellence in Cambridge, which will also feature a new Arm-based supercomputer.

Along with GSK, Cambridge-1 will be used by AstraZenica, as well as researchers from Guy's and St Thomas' NHS Foundation Trust, King's College London and Oxford Nanopore.

"The use of big data, supercomputing and artificial intelligence have the potential to transform research and development; from target identification through clinical research and all the way to the launch of new medicines," said AstraZeneca head of data science and AI James Weatherall.

UK Secretary of State for Health and Social Care Matt Hancock said "Today's announcement from Nvidia is an exciting moment for the UK's world-leading healthcare industry and a tremendous vote of confidence in the UK as an international centre for research, AI and innovation.

"Accelerating drug discovery has never been so important and it is investments like this that can make a real difference in our fight against countless diseases. I care about technology because I care about people and Nvidia's new supercomputer will aid the UK's best and brightest to undertake research that will save lives."

Once established, startups and other researchers will be invited to use Cambridge-1.

More in this category: « Engineering firm DEK Technologies looking to double its staff numbers How USQ IT supported remote workers during pandemic »
Share News tips for the iTWire Journalists? Your tip will be anonymous