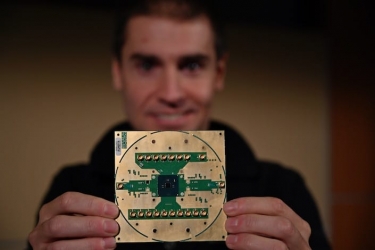 Intel believes Horse Ridge – a device that will allow the control of multiple qubits – is a world first.

Developed in association with QuTech (a partnership between TU Delft and the Netherlands Organization for Applied Scientific Research), the chip is fabricated using Intel's 22nm FinFET technology.

In-house fabrication of these control chips at Intel will dramatically accelerate the company's ability to design, test and optimize a commercially viable quantum computer.

A key aspect of the design is that it moves the quibit controls inside the quantum refrigerator, reducing the wiring required. Horse Ridge converts instructions into microwave pulses that manipulate the state of the qubits.

The device is designed to operate at temperatures around 4 Kelvin, and is named after one of the coldest regions in Oregon.

Current quantum computers operate in the millikelvin range — just a fraction of a degree above absolute zero – but silicon spin qubits have properties that could allow them to operate at 1 Kelvin or higher temperatures.

Intel aims to have cryogenic controls and silicon spin qubits operate at the same temperature level, allowing the creation of a quantum computing device with the qubits and controls in one package.

"While there has been a lot of emphasis on the qubits themselves, the ability to control many qubits at the same time had been a challenge for the industry," said Intel director of quantum hardware Jim Clarke.

"Intel recognised that quantum controls were an essential piece of the puzzle we needed to solve in order to develop a large-scale commercial quantum system. That's why we are investing in quantum error correction and controls.

"With Horse Ridge, Intel has developed a scalable control system that will allow us to significantly speed up testing and realise the potential of quantum computing."

More in this category: « The Coffee Club boosts NPS with help from InMoment VIDEOS: Samsung's business ready Galaxy XCover Pro with removable 4050 mAh battery and plenty more »
back to top