In 2016, mainframes very much a part of business: study Featured 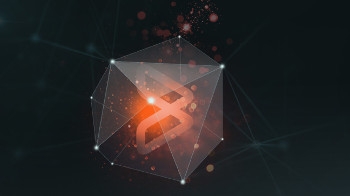 Computing devices may be reducing in size and a majority of users may be obsessed with just their smartphones, but the venerable mainframe still has a big and steady role to play in business, a survey by the US technology company BMC Software has found.

Now in its 11th year, the BMC mainframe survey was conducted this year among 1227 executives and technical professionals, with 51% being from the Americas, 42% from the EMEA and 7% from the Asia-Pacific region. A total of 48% of the companies these professionals represented had turnover of more than US$1 billion, 37% ranged from US$100 million to US$1 billion and 15% were below US$100 million.

However, overall, 89% of the respondents saw a long-term role for the mainframe, saying they depended on it because of superior reliability, performance and security. Survey participants came from the financial and insurance sectors (34%), technology (23%), government (16%) and other industries (27%).

The survey found that the increasing move to digital business was having measurable effects
on the mainframe. More activity, such as higher data and transaction volumes was seen and an increase in workload volatility and unpredictability was also in evidence.

Survey respondents reported an increasing number of databases (41%) being in use and also an increase in the speed of application change (45%).

A majority of mainframe shops acknowledged that the mainframe was the best platform to host this increased activity and to manage the unpredictability, due to reasons of security (55%), availability (53%), data serving (51%), and high-performance (43%).

Two-thirds of large companies saw increasing capacity in the last 12 months and a majority had seen increased activity. Half of the respondents said they kept more than 50% of their data on a mainframe.

The use of Java on the mainframe was said to be clearly increasing, with two-thirds of those surveyed answering this question in the positive.

Among the group that planned to increase the use of mainframes there was a tendency to take in all of its advantages, fully leverage the investment and examine ways and means to use it as much as possible for more work and take advantage of its capacity. 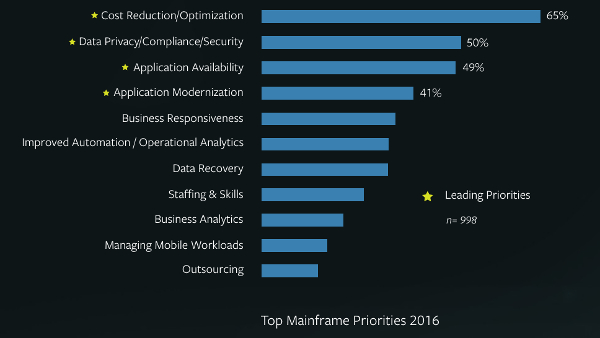 Companies that said they would be keeping their mainframe use steady were leveraging the hardware to maintain critical applications. They viewed the mainframe as a secure and highly available engine for running their business but were not looking to add new workloads.

The 19% who said they were looking to reduce mainframe use were seeking another platform for lower costs, driven mostly by management perceptions that the mainframe was expensive and outdated. Only 13% of the large companies surveyed fell into this bracket.

Bill Miller, the president of ZSolutions Optimisation at BMC, said in a media release accompanying the survey: "The 2016 BMC Mainframe Research Report presents compelling data about the current demand and future outlook for mainframes in digital business. With 89% of survey respondents projecting continued strong support for the mainframe, it is clear that companies view the mainframe as a long-term platform."

Credit Suisse IT director Frank Cortrell commented: "IT departments are moving toward centralised, virtualised, and highly automated environments. This is being pursued to drive cost and processing efficiencies. Many companies realise that the mainframe has provided these benefits for many years and is a mature and stable environment.

“Companies are considering the mainframe an integral part of their IT strategy and one that will help them reach their future financial and business goals.”

And Peter Carr, the chief executive of the Carr Advisory Group, added: “Each year, the annual BMC mainframe survey provides insights that are critical to organisations for planning and strategy. This year, the study underpins the impact of digital in driving higher data and transaction volumes on this critical platform and those organisations that are increasing their capacity and workloads on the mainframe can be more confident than ever about its reliability, security, flexibility and performance. Significant mainframe growth is still ahead of us."

The 13-page survey is available for download after registration.

More in this category: « Facial recognition for payments less than three years away AppDynamics Business iQ: helping tech help business »
Share News tips for the iTWire Journalists? Your tip will be anonymous