HP advocates'New Style of IT'

HP has announced a raft of products and services aimed at helping its customers move to what the company calls the 'New Style of IT' driven by big data, cloud, mobility, and security. That contrasts with the position of most vendors and analysts who think the 'S Factor' is social rather than security.

To help customers - end-users and service providers alike - assemble the hardware required for the shift to the New Style of IT, HP has announced new products in the areas of compute, storage and networking, along with related services. 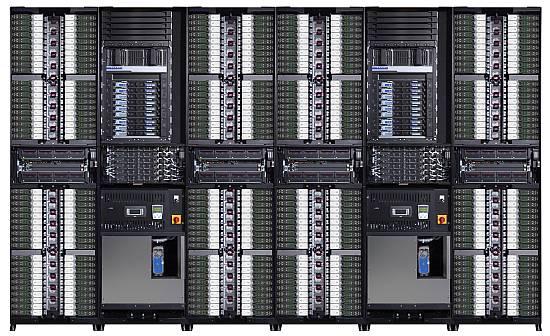 The Apollo 8000 (above), HP's new supercomputer, delivers more than 250 teraflops per rack, according to vice president and general manager of HP's server business in the Asia Pacific region Stephen Bovis.

"This is industry leading," he said, explaining that it is around four times the density of leading air-cooled systems and twice that of liquid-cooled systems from IBM or Cray.

The Apollo 8000 uses a system of heat pipes (below) to transfer heat from the CPUs to a thermal block in the rack, and then water cooling to carry it out of the data centre.

This patented arrangement keeps the water well away from the electronics, greatly reducing the risk of damage in the event of a leak. While the heat pipes contain a small quantity of liquid, Mr Bovis said it evaporates very quickly if it does leak.

In summer, the waste heat can be removed efficiently with evaporative cooling, or in winter it can be used to warm the occupied parts of the building or - in more extreme climates than experienced in Australian cities - to melt snow and ice.

Furthermore, the system moderates the water flow to the level required by the current workload. This is more efficient than the usual air cooling systems, which tend to overcool data centres, as well as avoiding hot spots, Mr Bovis said.

The result is that a lot of processing power can be packed into a small space at the same time as saving energy. An Apollo 8000 can save up to $1 million in direct energy savings over five years - substantially more if the waste heat is used for heating purposes - and in the process reduce carbon dioxide emissions by 3800 tons per year.

Page 2: another new Apollo system, and more news from HP.

Also new is the Apollo 6000, a conventionally air-cooled design with up to 160 servers per rack, giving up to 35% better performance despite occupying 67% less floor space.

The 6000 is very modular, Mr Bovis noted, so HP can build systems to suit the requirements of individual customers, thus bringing supercomputing to a wider market.

HP APJ principal storage technologist Paul Haverfield said "storage is at the absolute bottom of [the] stack" in that it doesn't matter how fast processing is performed if the server has to wait for I/O: "the buck stops with storage."

He described flash as the most disruptive change in storage since the introduction of the disk drive in the 1950s, but said that the conversation about flash had been driven largely by flash-only vendors such as Pure Storage, even though those companies' offerings lacked scalability and features demanded by enterprise customers, so such organisations have tended to use storage arrays with automatic tiering between flash and disk.

In contrast, the new 3PAR StoreServ 7450 provides all-flash storage for less that US$2 per gigabyte (thanks to hardware-assisted inline deduplication as well as proprietary sparing technology to improve the effective capacity of each SSD) with high performance (over 900,000 IOPS), guaranteed high availability (99.9999%), and scalability to 1.3 petabyte effective capacity ("we don't want all-flash arrays breeding like rabbits in our data centres," he said). 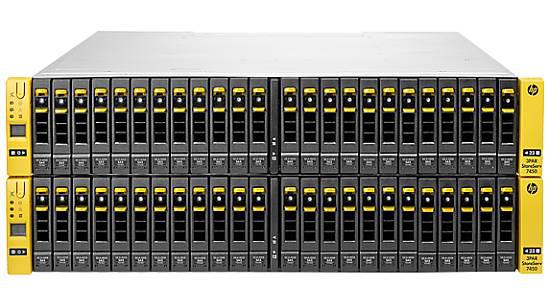 This combines the high performance sought by customers along with all the enterprise features traditionally included in 3PAR products, he said.

Mr Haverfield compared with 7450 with an EMC VMAX 10K array, which he said costs 3.8 times more per gigabyte (the comparison was based on a 250TB system with 5% flash and auto-tiering), requires 25 times more space, and delivers less predictable performance.

HP also announced new features for its StoreOnce Backup family, including a new federated capability said to reduce management overhead by up to 75%, better support for NAS devices, the ability to encrypt data in-flight and at rest, and the verification of data when it is stored on disk for extended periods.

Like most vendors, HP is on the SDN (software defined networking) wagon: "We can deliver an entirely programmable network for our customers today," said ‎HP Networking vice president and general manager Asia Pacific and Japan Amol Mitra. "The network is the most important heartbeat within the New Style of IT."

HP's announcements in the networking area "really leapfrog us against any competition," he said.

The Virtual Cloud Networking SDN Application - part of the forthcoming HP Helion OpenStack product - can "virtualise an entire data centre with disparate cloud environments" such as a mix of private and hybrid cloud systems with instant application provisioning.

The new FlexFabric Datacenter 7900 series switches (above) and the SDN Application together reduce the total cost of ownership by 75%, Mr Mitra claimed.

Improvements to HP OneView - a single management tool for servers, storage and networking - include support for HP ConvergedSystem, automated storage provisioning for 3PAR arrays, and full integration with VMware's vCenter.

HP is offering a range of new services to assist clients that share its vision of the New Style of IT and that wish to reduce the fixed-cost elements of their IT budget to free up money for additional R&D, change and transformation.

These advisory services help customers understand and plan for the New Style of IT, particularly in the areas of application modernisation and cloud deployment, mobility, big data, and security.

A related service offered in conjunction with IDC benchmarks a customer's IT maturity against that of other organisations to help establish a starting point for the other services.

Disclosure: The writer travelled to Mumbai as the guest of HP.

More in this category: « Financial services needs to ‘lift its game’ with investment in IT TechnologyOne tidies Epworth's books »
Share News tips for the iTWire Journalists? Your tip will be anonymous