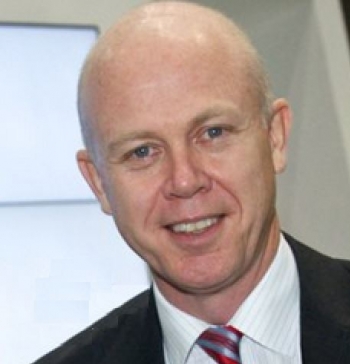 HP inherited disparate architectures from Tandem, DEC and Compaq, as well as a couple of its own. Bringing them all together has been a long process, which is nearly complete.

It’s a little over a year since Alan Hyde joined HP’s local operation as head of the company’s Enterprise Group. The move surprised some – he had been managing director of NEC Australia, but he moved from running a comparatively small Australian operation to running an important division of a much larger company.

Hyde certainly believes he made the right move. “There’s very few companies with HP’s breadth and depth. I can do more here than I could at NEC.” Before joining NEC in 2010 he ran SAP’s local operation, after running the software vendor’s northern region and a successful career in sales at PeopleSoft.

"At HP we’re enabling a new style of IT,” he says, which is very much the corporate line since CEO Meg Whitman, of eBay fame, started reshaping the company after she took over in 2011. HP had been struggling, lacking direction and losing money, failing to adapt to the new world of cloud and mobility.

Only in the last year has HP regained momentum and profitability. Hyde is not of course responsible for that, but he’s happy to be in a company moving in the right direction. As head of the Enterprise Group in the region he is responsible for the company’s large systems – the servers and storage and related software and infrastructure that go into enterprise scale organisations.

He says that market is changing quickly. “The big issue in enterprise computing is the increased number of conversations we are now having with line of business (LOB) managers instead of the IT department,” he told iTWire. “The IT department in many cases has become a barrier to addressing competitive situations.

“The IT platform is changing. The LOB departments want to be able to address business issues quickly, and not wait 6-12 months for the IT department to do something.”

Does that not, then, change the role of the IT manager? Is the IT manager or CIO role under threat? “The only ones at risk are those who think they can run IT the same way they have always run it,” believes Hyde. “The old IT department that had a large footprint and operational capacity is evolving towards one whose role is to run applications, not infrastructure. That is what we call the new style of IT.”

Hyde says technology is forcing IT departments to change. “We’ve seen digital disruption across many areas of the enterprise. Now it’s finally come to IT itself. IT is not about the technology portfolio any more, it’s about using a whole range of technologies to enable change.”

That move is behind the evolution of HP’s large system product set, says Hyde. Since acquiring Compaq in 2002 HP has been struggling to rationalise a number of different server architectures – Compaq had acquired major manufacturers Digital and Tandem in the 1990s, and HP itself had both a proprietary and a Unix based architecture.

Over the last decade or more HP has been evolving all these architectures, with their disparate chip sets and operating systems, towards one hardware architecture based on Intel processors. It is also – more slowly – moving the operating systems towards Linux, the open system version of Unix (HP’s HP/UX was the most popular of the many different varieties of Unix).

Hyde says that transition is now largely complete, at least on the hardware side. “There are still people running VMS (Digital’s operating system), but that is on the x86 (Intel) architecture. There are still some specialised technologies, but they are all converging.

“That is no longer really the issue. Now it’s about managing traditional architectures and cloud and the new breed of converged systems in a single environment. I really think HP is the only vendor that can do that.”

IBM, which is attempting to do much the same thing, may beg to differ, but when pressed on the subject Hyde is adamant: “The old mainframe model, which IBM is persisting with, is simply not cost-effective in the modern world. The price-performance of the new breed of high end Intel based servers just blows them away.”

HP has a large range of servers, from the mass market ProLiants (a name it inherited from Compaq), which now scale up to enterprise level, to its high end Cloudline systems which are for service providers like Amazon and Google. It builds special purpose Moonshot servers, the fancily named Integrity Superdome and Integrity NonStop X machines (to run Digital and Tandem software) and a range called Apollo, after its old proprietary architecture.

“We can win in that market,” says Hyde. “We are the only company that can combine converged architectures with cloud and traditional computing under a single management platform. When not done right converged systems add to complexity, they don’t reduce it.”

More in this category: « Opengear aims to speed up deployments with ZTP 85% of SAP licensees uncommitted to new cloud-based S/4HANA »
Share News tips for the iTWire Journalists? Your tip will be anonymous