Ethics and governance 'important for analytics and AI' 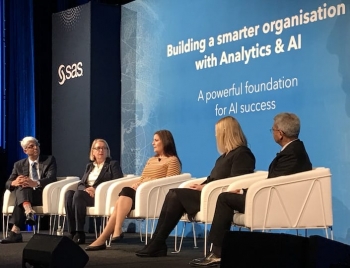 Australian organisations are getting past the "science experiment" stage of applying analytics and AI, to making important ethics and governance issues using the two.

An event organised by analytics software vendor SAS presented some real-world experiences with the introduction of analytics and AI to local organisations.

Worksafe Victoria is at the beginning of a five-year transformation aimed at becoming more prevention-oriented, which means being data driven, said WorkSafe Victoria chief data and analytics officer Kathryn Gulifa. The challenge is to operationalise analytics and AI by integrating them with production systems.

At Telstra, the goal is to make better and faster decisions by using data, and to reimagine reporting in order to better support decision making, said Telstra data reporting and analytics executive Elizabeth Moore. In appropriate situations, this can mean taking people out of the loop so decisions simply flow through systems.

Asked by Melbourne Business School associate dean (academic) and professor of marketing, Ujwal Kayande, whether there was a tension between privacy and providing customers with exceptional experiences, Bank of New Zealand head of data strategy and transformation Sonya Crosby said, "we always remember it's their data," and the bank's goal is "using information... for a real customer benefit" rather than mere advertising and marketing.

Informed, contextual consent is needed to gain customers' trust, according to Moore. So organisations should seek granular consent, making it clear what they are asking for and how they are going to use it.

This shouldn't be a "once and done" event, according to Gulifa, rather people should have the opportunity to change their settings whenever they feel the need to do so. While people may generally prefer to receive minimum communications from a particular organisation, during certain life events they may be more open to relevant messages.

Organisations should adopt "ethics by design", incorporating ethical considerations at every stage of the development process, suggested SAS Asia Pacific senior director, customer advisory Deepak Ramanathan. (Earlier in the event, SAS chief technology officer and chief operating officer Oliver Schabenberger cited venture capitalist Hemant Taneja's assertion that organisations need to move away from the idea of a minimum viable product in favour of producing a minimum virtuous product – one that has been tested for its effect on stakeholders and builds in guards against potential harms.)

Part of this ethical approach means ensuring that customers really do get the promised outcome, said Crosby.

Telstra has strong governance processes, said Moore. Analysts need to understand that a high priority is given to the secure storage of customer data, so decisions must be made carefully.

While governance issues are sometimes seen as a brake on rapid progress, Crosby suggested that they are actually a foundation for success. If the whole team is on the same page, it sets you free to explore, she said.

Gulifa had a similar perspective. Worksafe is establishing a new enterprise data governance framework aimed at making it easier for people to do the right things, and harder to do the wrong things.

It also helps if data scientists and similar employees are engaged with the human side of projects, suggested Moore, for example by involving them in conversations with their colleagues in business units and with customers. That way there are fewer ethical and governance issues.

A very practical point made by Gulifa is that integration issues should be considered from the outset. If you can't integrate an AI or analytics project with the relevant business software, it's probably not worth proceeding.

Schabenberger offered some advice for organisations that are still at the early stages of exploring analytics for integration with business systems: start small with one to three projects that are within the organisation's core competency (eg, don't build a recruiting system unless you're in the recruitment business), agree on the technical feasibility and business value of the proposed project, make sure it can be achieved by a small team within 6 to 12 months, and ensure there is a mechanism for recognising and communicating the project's success throughout the organisation.

More in this category: « Apple's new operating systems bring a cornucopia for enterprise Companies partner to optimise data for plant nutrition »
back to top