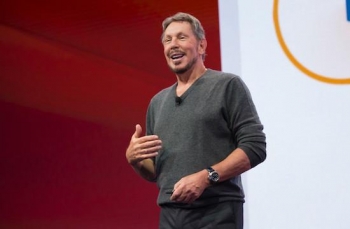 The programs and data used for testing are available from Oracle's website, and "if Amazon can beat our result, we'll put their result in", said Ellison.

Analytics were 24 times faster on Oracle Cloud than Oracle Database running on AWS. "That has a huge cost implication" as 24 hours of AWS use costs more than one hour of Oracle Cloud, he said.

The difference wasn't as great in the OLTP test: Oracle Cloud was only eight times faster. Ellison pointed out that there's no support for Real Application Clusters on AWS, so scale-out is not an option. And perhaps more importantly, running on a single server means "if that goes down, you're down hard", he said.

So how does Oracle Database compare with Amazon's own databases?

Oracle Database on Oracle Cloud was 105 times faster than Redshift on AWS, despite being configured to run on half as many CPUs.

Ellison was scathing about Redshift. "It's a new name for an old product," (Postgres), he said. "Amazon forked Postgres, and it is now totally proprietary... It is NOT open source." Redshift only runs on AWS: "even at my age I can remember a list of one," he joked. Choose Redshift and "you're locked in, baby."

He explained Redshift's slowness by pointing to a list of features that it lacks, but which Oracle shipped 20 or more years ago, including table level locking, integrated data mining and OLAP, and rich data types.

It was a similar story with Aurora, Amazon's fork of MySQL 5.6 that's "about 20 years behind", according to Ellison, as it lacks such features as parallel SQL and load-balancing across a cluster. Oracle Database was 35 times faster than Aurora in Oracle's testing.

He went on to suggest that AWS is more closed than an old IBM mainframe. It was possible to move workloads from IBM hardware to compatible systems from Amdahl or Fujitsu, but with AWS "there is no choice whatsoever."

"Once you move in, you cannot move out," Ellison warned, adding "if they raise prices, open your wallet" because applications written for Aurora, Redshift or DynamoDB are not compatible with Oracle Database, DB2, Teradata and other databases.

If all that wasn't enough, AWS uses to be a lower cost choice, "but not any more".

Oracle's new Exadata Express Cloud Service — "full Oracle with all of the options," "with Exadata performance" and "with complete compatibility" — is priced from US$175 a month.

That's less than the US$327 for Oracle SE on Amazon RDS or the US$245 for Aurora, he observed.

AWS used to be the leader in cloud infrastructure, but Oracle's second-generation IaaS leapfrogs AWS in terms of cost, performance, reliability and security, Ellison claimed.

It is "demonstrably superior" he said: 20% cheaper and 11.5 times faster than AWS's fastest.

Disclosure: The writer attended Oracle Open World as a guest of the company.

More in this category: « Oracle claims IaaS edge on Amazon OVH to set up shop in Australia »
Share News tips for the iTWire Journalists? Your tip will be anonymous