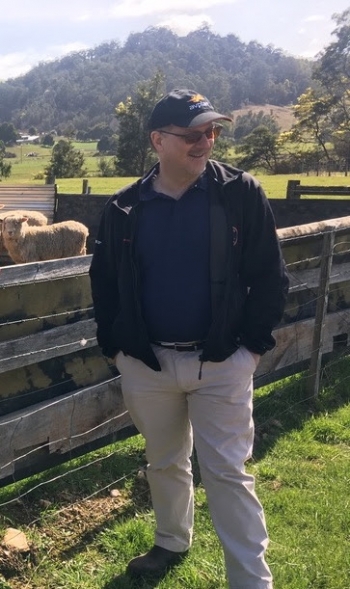 Simon Hackett at his Tasmanian farm

Redflow (ASX:RFX) has designed an energy system to deliver energy independence for the 73-hectare property - The Vale - located in North West Tasmania.

The farm, which is diversifying into additional forms of agriculture, is also exploring an expansion into eco-tourism operations, and the energy harvesting, storage and distribution system at The Vale will use an initial deployment of 27 ZBM2 batteries, storing as much as 270 kilowatt-hours (kWh) of energy, interfaced to a large fault-tolerant cluster of 12 x Victron Quattro 48/15000 inverter/chargers.

The system will harvest renewable energy from a 100-kilowatt peak (kWp) ground-mounted array of photovoltaic (PV) solar panels, with scope for future expansion.

Hackett says his goal for the system is to create energy independence for the farm, delivering energy to power both building loads and electric vehicles.

“The project, with an overall budget of around $1m, will include the building of a new site-wide microgrid. This will use new underground power interconnects to link seven distinct buildings across the whole property.”

Hackett said The Vale energy system, which will initially export surplus power to benefit the Tasmanian electricity grid, is anticipating a transition to the use of electric farm vehicles.

“We already have a Tesla Model S at the property and we plan to progressively replace our existing fleet of diesel farm ATVs, utes, and tractors with electric versions as soon they become available,” he said.

“We read with interest earlier this year that Toyota is committed to making electric HiLux 4WD vehicles and we would love to take delivery of the first of those to reach Australian shores.

“While designed to be grid-connected, the system will offer resilience by automatically switching to off-grid mode during any grid power failures. We can and will add more renewable energy generation using solar and/or wind if required in the future. Even after the full replacement of diesel vehicles with electric ones, we expect the property to be a net exporter of electrical energy to the Tasmanian grid.

“I am convinced, based on my deep experience with Redflow, that ZBM2 batteries at the core of this energy system can deliver the hardworking energy storage and longevity to make this investment pay off over the long term.”

More in this category: « Electric vehicle adoption gets $15 million funding boost from ARENA China leads Europe, US in ‘new energy’ vehicle sales »
back to top