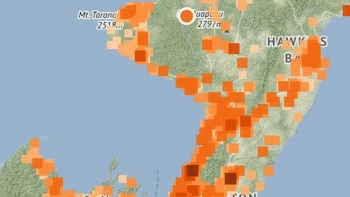 New Zealand was hit by a 6.2 magnitude earthquake on Tuesday afternoon. Very unusually for New Zealand, this quake was very deep, yet still very strong, and in a somewhat unexpected location.

This earthquake was centred about 25km southwest of Taumarunui, a regional town approximately 200km south of Auckland.

There were a few unusual features. Firstly the depth — 207km — is quite rare for New Zealand, and most earthquakes of that depth occur around the Fiordland area of southwest South Island, not in the west of the North Island.

Beyond that, reports of where (and where not) it was felt vary very widely with some close-by locations not noticing it – a local government councillor just a few tens of kilometres away reported feeling nothing, yet there were strong reports from Christchurch around 500km away.

This earthquake appears to be the result of the Pacific ocean floor being subducted under the North Island. The quake's location is approximately 300km from the subduction zone (running parallel to the eastern coast of North Island) and with typical subduction angles of about 30 degrees, the geometry is about right. There is an excellent summary of the process here. Observe that the volcanic action takes place relatively close to the subduction zone (as is true in New Zealand – with the geothermal zone to the east of this current earthquake). Most volcanoes of this type are due to the super-heating of water held within the seafloor sediments – it has to escape somehow!

Generally, major earthquakes related to subduction zones are caused by "lumps and bumps" on the seafloor which struggle to slide past the lithosphere above – eventually they move with a big 'shock' hence the earthquake. Readers may observe that many of the very large earthquakes occurring along the Chilean coast can be matched with chains of undersea volcanic peaks – these have a major difficulty sliding under the South American plate.

The variability in perceived strength of the quake is due primarily to the depth, but this is tempered by various obstacles and free-flowing zones in the crust above which can guide and concentrate (or disseminate) the earthquake waves – much like the perceived signal strength of a far-off radio station where driving a short distance can yield stronger and weaker signal with no obvious reason.

No significant damage has been reported – this is entirely typical of deep volcanoes. In addition, there was no tsunami warning – the only time a tsunami can occur is when the earthquake is shallow, under water and includes vertical movement of the sea bed - none of those were true in this instance.