Your employer may neglect training, but you can't: analyst 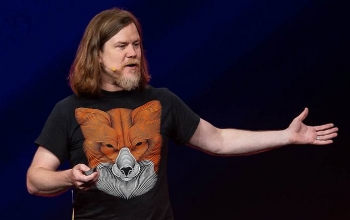 IT workers need to develop cloud-related skills — on their own time if necessary — if they are to remain relevant to employers, according to an industry analyst.

Services such as AWS mean "there are no boundaries between having an idea and executing", according to developer-focused industry analyst RedMonk co-founder James Governor during his keynote address at the Pure Accelerate conference. "Convenience is the killer app."

This means practitioners choose whichever services and technologies they want, resulting in "a high level of fragmentation in the industry right now."

One approach currently getting a lot of airtime is continuous delivery. But that "sounds scary" to a lot of organisations: why should developers be the ones to decide when a service is activated?

So Governor advocates progressive delivery, for example by using blue-green and canary releases. A new feature or service can be made available to a subset of users, perhaps those in a particular city, before extending to wider audiences as confidence is gained. Thus developers do their jobs, but the business decides when to go live.

However, "systems will fail" so organisations need to be prepared.

That preparation might include site reliability engineering – "a set of really useful practices" though it has limitations, according to Governor. In particular, ideas such as being on call around the clock may be acceptable if you work for Google on a US$250,000 salary. But if you have kids, you're already on call, he points out.

Similarly, the idea of employing full stack developers is fine, but someone who is the real deal can command a salary around US$250,000, and many organisations won't pay that much.

So in practice, organisations need specialists: "if you want spice, you wouldn't go to the fish shop."

But specialisation isn't static, even though some 'old' skills keep their place for decades. Despite all the attention that Hadoop received for a period, it turned out that a regular database was just as good in most situations, so an understanding of SQL is still valuable, Governor said. "Thirty-year database skills are still relevant."

IT people can learn new skills that will make them more valuable, he suggested. For example, anyone involved in operations needs at least a familiarity with AWS, and possibly a certification in a relevant area.

Storage specialists who don't know about S3 and Glacier, for example, wouldn't be as useful to their organisation as they should be, and are neglecting their own careers, he told iTWire.

Similarly, organisations don't need everyone to be Kubernetes experts, but it helps to learn the basics and to understand what developers' expectations are.

AWS is "so accessible", he noted, but it wouldn't hurt to also learn something about another cloud provider's technology.

Enlightened organisations provide budgets (time and money) for their employees to undertake such learning. Governor cited Dutch bank ABN Amro, which expects its staff to spend 10% of their working hours on education, and provides them with a budget for attending courses and events.

"It's not time off, because they are actually working" while training, he pointed out.

Everyone claims to be a "learning organisation" these days, but can that claim be true if they don't have a budget for relevant activities, he asked.

An organisation that wants to be successful in areas such as DevOps has to invest in training its people, even if it also needs to bring in new talent.

But if your employer isn't supportive, it doesn't take much to explore the basics. One project he suggests is to upload a few of your own photos to AWS, and then look for third-party tools that make that task easier.

And if you're involved with data warehouses, find out what AWS offers in that area, because you'll be competing with that technology.

"You're not doing yourself any favours" if you are unable to suggest how using AWS or another cloud provider could benefit your employer, he said.

And while VMware is making it easy to bring vSphere skills to bear on Kubernetes administration, such specialists need to learn more about containers generally: for example, how to manage persistence.

Another tip is to learn about AI toolkits such as Kubeflow, which uses containers to make AI more effective.

Meet-ups are a useful part of self-directed learning, he suggested. Thanks to such events "we've got better opportunities [to learn] than we used to have". If you're an introvert "you can just sit in the corner"and absorb the material, although sometimes it's the side conversations that produce the most value.

Organisations could consider using some of their education and training budgets to host such events.

Sometimes a bet placed by learning a particular skill doesn't pay off — Hadoop is one example, he suggests — but there are always some aspects that are transferable, he told iTWire.

Anyone who has shown they can acquire IT skills such as coding is worth further investment, Governor argues, because they have demonstrated an appetite for work and learning, and proved they can learn new things.

"We've got to keep learning. It can be exhausting, but it's better than not having a job," he said. "Any new skill helps."

Disclosure: The writer attended Pure Accelerate as a guest of the company.