Organisations today have unprecedented volumes of data at their fingertips, but to take advantage of it they need professionals who are skilled in data analytics – and they’re willing to pay big dollars for their services.

The new role of “data scientist” is one of the world’s fastest growing professions. Harvard Business Review  labelled it the “sexiest job of the 21st century”.

LinkedIn named “statistical analysis and data mining” as the top skills of 2016 in Australia  and found data science was the second-most sought-after job skill in 2016 in the US and globally.

The explosion of Big Data is being driven by Internet usage and cloud computing, as well as the proliferation of new technology platforms such as sensory networks and augmented or virtual reality.

Nearly all key business processes and systems generate exhaust flumes of data. In addition, digitally enabled devices generate vast quantities of data from their innate characteristics of  high availability, high throughput, multi-threaded and often continuous data streaming. The data streams that are left behing are often overlooked, but provide a wealth of opportunity beyond their initial collection once they are aggregated, enhanced and linked. The Internet of Things will only accelerate this growth in data.

Data is an unusual factor of production as it can become the product itself, can be used to create the digital service, to understand the interaction with the digital service, to understand a wider set of relationships  or even to predict a future state or need. The same data can then be used for further unrelated purposes creating additional value by third parties. This is where data science and the skilled practioners add value.

As more and more companies and organisations integrate data analytics into their operations, strong demand for data scientists is causing a shortage of qualified professionals and, in turn, pushing up salaries. Some top-level data scientists are commanding salaries of more than $200,000 in Australia, according to the jobs website Indeed.com.au.

A survey by Indeed reveals that the average annual salary for data scientists in Australia is $111,911. This figure compares favourably to the average of $93,995 for solicitors and $70,048 for accountants. Data scientists also command a premium compared to other IT professionals, with systems engineers averaging $96,480 and Web developers averaging $78,917.

Indeed’s analysis is based on 2174 salaries submitted to it anonymously by data scientist employees and users and collected from past and present job advertisements on Indeed in the past 36 months.

It is clear that for people still deciding on their career, data science offers great employment and salary potential. What is even more striking is the positive impact on salary levels that can come from postgraduate study.

Recent research by Deloitte Access Economics predicts that data scientists who have completed postgraduate study in Information Technology will have an average income of $130,176 in 2021-22, up from $111,634 in 2016-17.

The future of work: Occupational and education trends in data science in Australia says that across postgrad-qualified IT professionals, a lifetime wage premium of 51% is directly attributable to their qualification, compared to workers with no post-school qualifications.

This premium stems from the greater skills and productivity of workers in the data science field who achieve postgraduate qualifications. In particular, workers who are already qualified in their area of employment can perform their existing roles more efficiently and take on expanded responsibilities once they acquire data science skills. 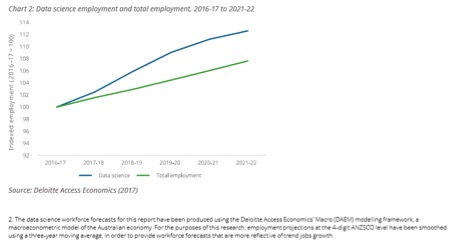 Deloitte Access Economics forecasts that Australia’s data science workforce will increase to 339,000 in 2021-22 from 301,000 in 2016-17, representing an annual average growth rate of 2.4%, outpacing the growth rate of 1.5% a year forecast for the Australian labour force overall.

Computer programming skills will remain fundamental to the data science area, to ensure individuals build familiarity with computer languages such as R, Python, SQL, SAS, and MATLAB. This is evidenced by the relatively high averge forecast annual growth rate of 3.0% for software and applications programmers for 2016-17 to 2021-22 (see table above).

At the same time, however, there is a need to develop an understanding of the whole lifecycle of data, including the acquisition, management and pre-processing of data, as well as mathematical and statistical analysis, visualisation, reporting and decision-making.

BACK TO HOME PAGE
Published in Education
More in this category: « Vault Systems to train govt IT workers in cloud skills MYOB developher programme seeks to boost female developer numbers »
BACK TO HOME PAGE
back to top