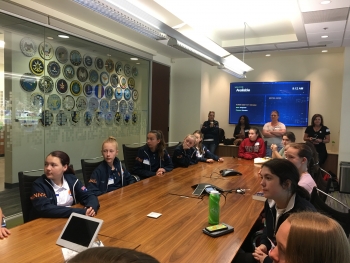 Australian and New Zealand schoolgirls as young as nine have pitched their apps to top executives and engineers in Silicon Valley as part of the Brisbane-founded Tech Girls are Superheroes program.

The creator of the 12-week STEM entrepreneurship program,  chief executive Dr Jenine Beekhuyzen, says the winners pitched their solutions to executives and engineers at the sprawling campuses of eBay, Google and Facebook in Silicon Valley, and the skyscrapers of Salesforce and IBM in San Francisco.

“The girls showed real confidence in pitching their solutions, and the execs were amazed with what they have produced, and how well they pitch and respond to difficult questions,” Dr Beekhuyzen said.

“They are extraordinary STEM ambassadors for Australia and New Zealand and certainly entrepreneurs who will change the world."

Dr Beekhuyzen says the girls also met and pitched their solutions to the chief executive of Australian start-up Skedulo in San Francisco, “who explained his successful entrepreneurial startup journey, which led him to the US”.

The Pacific Pines Primary team Sun Fun developed a sun safety app. They were funded by TechnologyOne for the trip and have already partnered with the Queensland Cancer Council and LA-based Suncayr.

“The girls are even forming partnerships to create their app to a wider audience and are really entrepreneurs in the making,” Dr. Beekhuyzen said.

Pacific Pines Primary School teacher Kara Griggs says the experience of visiting some of the world’s biggest tech companies was very inspiring and what the girls have learned through the program has been extraordinary.

“This truly was a trip of a lifetime, and it was invaluable not only for the girls but for us as coaches and teachers with us all getting so much out of it,” she says.

“It was such a unique experience, and we are all inspired by tech and have had our eyes opened to the future,” Anderson says.

It’s the third year Dr Beekhuyzen has led a trip to Silicon Valley with winners from the annual Search for the Next Tech Girl Superhero competition.

The 2018 competition has just concluded, with more than 1000 girls vying for the top prize and a trip to Silicon Valley in 2019.