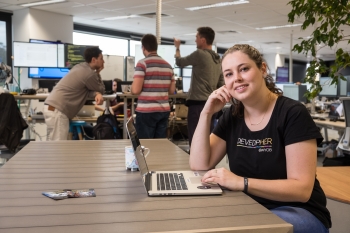 Accounting software provider MYOB has launched the second wave of its developher programme aimed at increasing the number of women in technical roles and offering successful candidates a fully paid, full-time internship.

MYOB says each participant who successfully completes the program will be offered full-time employment with the company as an associate developer.

Chief executive Tim Reed has committed to recruiting more women in technical roles, aiming to have at least 40% of graduate level roles in the engineering team filled by women each year.

“The developher program was put in place to help address the shortage of female developers in the industry,” MYOB’s chief employee experience officer Helen Lea said.

“We know that a diverse workforce will support greater innovation and help us to create even better products.  It goes beyond that too – creating opportunities for women in technical roles is the right thing to do.”

Lea said MYOB hopes that having programs such as developher in place will encourage other tech companies to be proactive about attracting women into technical roles.

“Companies need to be proactive about attracting women to technical roles,” Deutscher said.

“There’s a misconception about working in the industry, that’s why a lot of women might not follow that path. People think you sit in a cubicle all day, that it’s a boys’ club or that you have to be a geek who likes playing video games.

"Some companies might have that kind of environment, but I think larger companies, like MYOB, who have the ability to hire wide-ranging teams and train the right person for the role, have a very different culture.”

The last intake of developher in 2016 attracted around 200 applications, which MYOB says shows there’s a strong appetite for women who want to learn to code. Since then the programme has been refined to include professional training from Coder Academy, as well as on-the-job mentoring and learning.

“Developher isn’t a graduate program” Lea said. “Applications are open for all women interested in a career in this field, regardless of their previous experience.  If you’ve ever considered a career change into technology but not been sure how – developher is the answer.”

Applications for MYOB’S next developher program are due by 30 May, and are offered in Melbourne. The program is fully paid and tailored to each individual’s pace of learning.