MBS Master of Business Analytics course backed by SAS and others 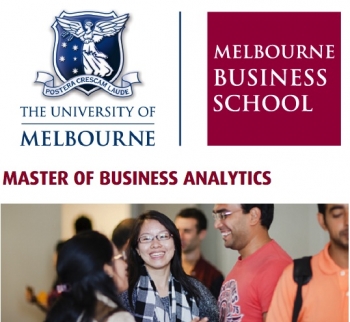 The University of Melbourne's new Master of Business Analytics degree has gained backing from analytics software vendor SAS and other industry players.

The first intake to the Master of Business Analytics course at the University of Melbourne's Melbourne Business School (MBS) commenced last month.

It aims to address the expected shortfall in the number of analytics specialists with an understanding of business.

According to MBS Dean Professor Zeger Degraeve, "Industry surveys show that over the next two years, over 1600 jobs will be created in Australia alone in the field of Business Analytics."

The one year, full time course - along with advanced business analytics research at MBS - has gained the backing of SAS, which has become the leading founding partner of the MBS Centre for Business Analytics.

While no numbers were mentioned, centre director Professor Ujwal Kayande thanked SAS for its "generous support."

The centre is also supported by Woolworths, AT Kearney, Seek, Brightstar, Suncorp, and Telstra, among others.

Supporters variously provide the people who sit on the centre's industry advisory board (including SAS chief analytics officer in Australia, Evan Stubbs), funding for scholarships, data sets, and workplace secondments, as well as other types of support.

Seven scholarships have been awarded this year, including those sponsored by AT Kearney, Woolworths, and Carlton & United Breweries. An important consideration, given that the course fee is $48,000.

In addition to the masters degree, graduates are also awarded the SAS Certificate in Business Analytics.

"This collaboration bridges the gap and will greatly aid the growth of a much needed talent pool."

More in this category: « School library resourcing vital to improved literacy Digital taking over as printed manuals disappear »
back to top