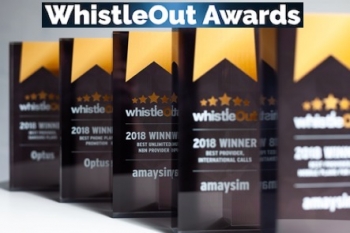 The inaugural WhistleOut Awards 2018 have been launched and announced, "recognising and celebrating the companies that have consistently provided the best service plans and promotions to Australians over the last 12 months".

WhistleOut. It's billed as "Australia’s phone and Internet comparison site", and its new WhistleOut Awards "were judged based on how competitive their plans were on a monthly basis from July 2017 – June 2018, across a range of categories".

There are 16 awards in total, and were presented "covering the full spectrum of mobile phone and internet plan categories, reflecting how most Australians use their phones and internet".

So, who are the winners?

The 2018 WhistleOut Award winners are:

Joseph Hanlon, editor and publisher of WhistleOut, highlighted the competitiveness and changing shape of the award categories during the year, and said: “2018 has seen a lot of changes in the telco industry, across both mobile and Internet.

"Data allocation has become a real battleground for winning customers in the mobile space, while the ongoing NBN rollout continues to change the shape of Australia’s internet landscape.

“What’s been particularly noticeable is how different plans and providers led a category at times, and then new deals came in and took top spots. It really highlights the ever-changing nature of the telco industry, with plans and pricing continually improving.

"This was especially apparent for the Best Value NBN Provider, where the market changed radically with the changes to NBN50 pricing in December 2017.

“While each award category had a number of providers with competitive plans that scored points throughout the year, every category also had a clear winner that consistently delivered value to consumers in that segment.

"We congratulate the winners of the 2018 WhistleOut Awards for setting the benchmark in competitive telco plans and driving better deals for Australians.”

More information on the WhistleOut Awards and all winners is here.

"The WhistleOut Awards are aimed at finding the best providers for different phone and Internet needs on a national level.

"WhistleOut reviewed the biggest cross section of providers possible, including the top 10 service providers in each category, (the top ten service providers typically cover 80% or more of Australia’s available phone and internet plans), and many smaller providers.

"The WhistleOut Award categories are judged by awarding 3, 2 and 1 points to the providers of the three best plans in each category on a monthly basis, (July 2017 – June 2018).

"The award winners are the providers with the highest number of points at the end of the 12-month period. A provider can receive points for multiple plans in a category if their plans best match the award criteria.

"The two exceptions to this judging process are the Best Promotion awards for Mobile and Internet.

"These awards are given to the single best promotion over the 12-month period as judged by WhistleOut’s in-house panel of experts."