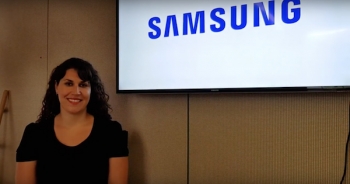 Samsung Australia's CSR dedication to STEM is impressive, but with only 16% of students studying higher-education STEM subjects, may its efforts long continue, and be widely emulated.

Samsung has focused on STEM in Australian schools over the last three years, with iTWire covering Samsung's 3-year partnership with Questacon in Canberra back in mid-August 2015 in an article entitled: "Questacon, Samsung partner on Smart Skills program", and then Samsung's efforts in late 2016 with the Spatial Environment Research Centre (SERC) in Canberra, entitled "STEM needs all the help it can get".

This was followed up in December 2016 by an article entitled "Samsung, University of Canberra collaborate on STEM learning research."

In March this year, our article entitled "Samsung enables disadvantaged schools to ramp up the STEM dial" covered the company's three year partnership with Social Ventures Australia (SCA), while in June, our article entitled: "VIDEOS: Samsung Australia and University of Canberra grow STEM skills spatially" documented an event at Canberra's Parliament House celebrating the release of new findings in text and video formats, capturing the event in full and some video interviews with students and executives thereafter.

Now in December comes news of Samsung and Remix Sydney 2017 having worked together this year "to contribute different perspectives and fresh ideas to the STEM conversation, not just within the education sector, but across the wider Australian community."

Both companies bill the partnership as "unique, bringing together technical expertise, community perspectives and unexpected contributors from around the world to explore STEM and creativity by hosting a special stage at the 2017 REMIX Sydney Summit."

We're told that, "of note, Mikaela Jade (CEO & Founder of Indgital), Ally Watson (Founder of Code Life a Girl) and Topaz Conway (Chair of the Board, StartupAUS) all spoke about creativity, technology and entrepreneurship."

I was given the opportunity to interview Samsung Australia's Head of CSR, Tess Ariotti, who I also interviewed at Samsung and the University of Canberra back in June, about Samsung's CSR and STEM programs this year, and Remix Sydney 2017, as you'll see below. A wrap of the questions asked and the rest of the article continue thereafter, so please read on!

In the video interview, I introduced Tess and welcomed her, noting that we'd spoken before recently at the Canberra STEM event, and that we were now speaking about Samsung's CSR and STEM efforts, culminating in the recent Remix Sydney 2017 event, of which Samsung was one of the major partners.

We spoke about the Remix conference, the Make My Idea campaign (details below), the fact only 16% of higher-education students are studying STEM subjects, which seemed like such a low number to me given teenagers today don't know of a world without the Internet having always been on. We spoke about the Creators Wanted program (details below), some of the great ideas that the students came up with (which you can see in the video embedded below) what more can be done, the future, great advice and Tess' final message to viewers, readers and STEM students.

Samsung also shared information about its Creators Wanted and Make My Idea programs, and said:

"We know that the workforce is rapidly changing and as a result, the jobs of the future will require higher levels of digital literacy. As it stands, just 16% of students are entering higher education in STEM fields which makes the STEM skills gap in Australia a national priority.

"The reality is, maths and science can be boring, difficult, and for many students, there is no clear connection between these subjects and their dream job. This results in a disengagement from STEM, as early as primary school.

"To bridge this gap, Make My Idea was launched to visually highlight the skills and technology required to bring their ideas to life and to show students that the majority of the things they are interested in are largely made possible by STEM.

"With over 5,000 entries nationwide, Make My Idea encouraged students to submit their most innovative and unique invention ideas.

"Ideas ranged from a personalised memory foam helmet insert which molds to the wearers head to ensure safety when riding both horses and bicycles to a bed cover which sources the energy from your body when you sleep to charge your phone. I’ve attached some images to this email for reference."

The Make My Idea program resulted in an excellent 45 minute TV show video showcasing the great ideas the students came up with, interviews with the students themselves and more, which you can watch below, embedded, or at Samsung's Make My Idea site.

I commend Samsung on its efforts in the STEM space, and as noted in my introduction, I hope the program is widely emulated by relevant companies and organisations that can help make a real difference in the STEM knowledge learned and explored by as many young people as possible.

This way, our luck as the lucky country will hopefully continue, while as many student STEMS as possible are planted and nurtured, encouraged and challenged to maturity for their technological, academic and life benefit, and that of us all.

More in this category: « Report: 90% of US companies struggling to fill sales roles FULL VIDEOS: Consensus 2017 Award Winners announced, iTWire wins for Best Feature Writer »
BACK TO HOME PAGE
back to top