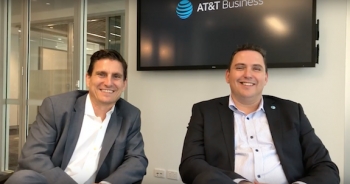 AT&T has been in Australia since 1992, growing into a leading premier multinational integrated solution provider across many industry verticals, and has recently opened its centre of health excellence in the region, so we spoke to two top executives about the health of the business.

AT&T. It's the US equivalent of Australia's Telstra, except it's much bigger given everything is so much bigger in the US than Australia. It has been in Australia since 1992.

The company has offices in Sydney and Melbourne, but is present in every other major city across the country, with many engagements in multiple industry verticals, including healthcare, which this article is about, and which features a video interview with AT&T Australia managing director, Martin Creighan, and the technical director – Healthcare, Emerging Technologies at AT&T, Tad Reynes, which is embedded below.

First though, a little bit of extra background, with the company proudly boasting that its capabilities inside Australia "spans from Network, Cloud, Hosting, Internet of Things, Security, Unified Communications, Applications as well as Service Management."

As you'd expect, the company "provides local account management", and says it offers "innovative design and operational support to both Australian headquartered organisations as well as to Australian branches of global customers".

Now, with this article about AT&T's recent move to make Australia its "centre of health excellence in the region" and having announced a new office opening in North Sydney to support this growth, it's important to note that telecommunications companies leveraging their skills into the healthcare (and other verticals) is to be expected, with Telstra having opened its T Health division back in 2014 and having made many moves in the area since.

Even so, competition is good, and naturally, as a global business with decades of experience service global customers, AT&T notes that "many healthcare companies" rely on the company's "technology and global networks for enhanced connectivity".

AT&T says this enables those businesses "to better adapt to market changes around the world in near real time," and thus AT&T’s move "into Australia signals a renewed focus on this segment throughout the region".

Naturally, AT&T says it "aims to advance it capabilities to meet the evolving needs of its healthcare clients throughout the region, helping healthcare companies take advantage of technology trends like big data, mobility and the Internet of Things."

So, with that in mind, I was approached to conduct an interview with Creighan and Reynes, who were naturally keen to discuss the applications AT&T has introduced to the medical vertical and how these can help improve healthcare Australia, as well as the business’ overall objectives for growth in this sector.

Here's the video interview in question, with a summary of the questions posed below.

I started by introducing both Creighan and Reynes, and welcoming them to the program.

Both Creighan and Reynes had a lot of very interesting things to say about AT&T's activities and business in Australia and the region, as you'll see in the interview above.

After discussing this, we veered into the future and what it might hold for the medical space over the next few years, great life advice from both gentlemen, and their final message for readers, viewers and current and future customers and partners.