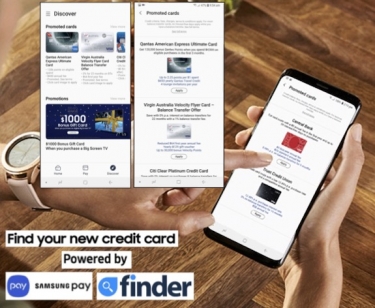 A first-of-its-kind feature in Australia has launched through Samsung Pay and comparison service Finder, promising to take "shopping for credit cards to the next level of convenience" via Samsung's "Samsung Pay" digital wallet mobile payment app.

Samsung Electronics Australia and Finder have announced the launch of "Promoted Cards".

We're told this is "a new credit card shopping feature for Samsung Pay, enabling everyday Australians to discover compelling credit card offers from participating financial institutions (which at the time of launch include Amex, Citibank and Virgin Money, with more issuers being promised to be added over time).

Obviously to be even more useful, you'd want to see more cards from the well-known banks, credit unions and other relevant financial institutions, but things have to start somewhere, and its not as if American Express, Citibank or Virgin Money are unheard of entities, they represent three of the biggest brands in finance globally.

Now, if you already have a Samsung smartphone with Samsung Pay and are looking for this feature, we're informed that "Promoted Cards is available to all Australian Samsung Pay users from today with the latest Samsung Pay software update".

I've used Samsung Pay - Samsung sent me $100 electronically to test the service out with a little while back, and I can happily report that it works exactly as advertised. I was even able to transfer the unused balance from one Samsung Galaxy device to another, and moving the remaining balance across was easy and painless. I was able to effortlessly use Samsung Pay in supermarkerts, convenience stores and service stations - it worked!

All I had to do was set up Samsung Pay on the Samsung smartphone I was using, add the relevant card, and then "swipe up" from the home screen to get into the Samsung Pay interface. It authenticates with my fingerprint, or a pin, and you simply tap the phone onto the usual "tap and go" card reader, and the payment is made. Naturally, Samsung Pay wants to become your default payment service, instead of Google Pay, and fi you choose to use Samsung Pay, it makes naturally sense that you make it your default payment service.

You can also use Samsung Pay with the Opal transport payment system in NSW, without the need to unlock your phone, which is a very handy feature, something that was introduced earlier in the year - and all of this has helped Samsung to double the number of transactions it has done this year, as one of its representatives confirms below.

Article continues after this screenshot.

So, what is more info on Samsung and Finder's new "first-of-its-kind" feature in Australia?

"Samsung Pay users can filter offers based on categories of their choice including balance transfer, frequent flyer, rewards program, no annual fee and low interest rate. Once an offer is selected, users need only to click to complete their application via the issuer site.

"The adoption of digital wallets is rapidly growing in Australia, putting convenience at the front and centre. According to research from Finder, more than a quarter (26%) of Australians use their smartphone or smartwatch to make transactions. In fact, nearly one-in-ten (8%) say they use a digital wallet all the time".

Mark Hodgson, Head of Samsung Pay Australia said: “Samsung Pay is committed to empowering Australians’ on-the go lifestyles. Australians are embracing the convenience of using digital wallets. This year, we have seen the number of transactions in Samsung Pay double.

“Promoted Cards enables Samsung Pay users to easily and conveniently ­­discover and apply for some of the most competitive credit card offers available through the app they already use and trust to pay, all on the go.

“Our partnership with Finder, a market leader in credit card research and comparison, reflects our commitment to collaborating with partners to innovate and make life easier for Australians,” Hodgson added.

Frank Restuccia, Co-Founder and Director of Finder said: “This is the first time Finder has entered into a partnership with an app in Australia. The partnership has seen the alignment of two innovative and customer-centric brands, who are committed to providing Australians with the information they need and the latest technology to make personal finance easier.”

So, where else has the Promoted Cards feature been unveiled?

Samsung says the new Australian launch "follows the success of similar solutions driven by Samsung in other countries including France, Switzerland, Mexico and Malaysia".

And, as noted earlier above, the launch of Promoted Cards "follows Samsung Pay’s announcement earlier this year to enable users to pay on the NSW Transport Opal system without unlocking their Samsung phone. In 2018, Samsung Pay also became the first smartphone digital wallet provider to partner with all of Australia’s four major banks".

More information on Promoted Cards can be found at this "Terms and Conditions" PDF file.

More in this category: « Building agtech, fintech capabilities in ANZ 30th Anniversary of the Internet in Australia Celebrations sees claim of quantum supremacy »
back to top