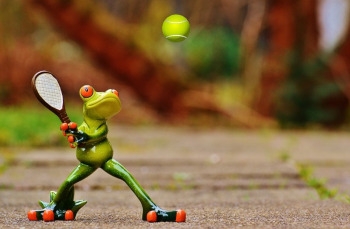 Analysis of thousands of shots played by tennis players Rafael Nadal, Novak Djokovic and Roger Federer by researchers at the Queensland University of Technology has enabled them to develop an algorithm that can predict where each player will land his next shot.

Of the three, the researchers found that it was most difficult to predict where Federer would land his next shot.

It could also lead to the development of virtual reality games that provided the opportunity to play a virtual match against the world's top players in an artificial grand slam match where the matchplay of any player reflected their actual game.

Dr Denman is part of the QUT team that includes Ph.D. student Tharindu Fernando, Professor Sridha Sridharan and Professor Clinton Fookes, all from the Vision and Signal Processing Discipline, who created the algorithm using Hawk-Eye data from the 2012 Australian Tennis Open, provided by Tennis Australia.

The team limited their research to the three players mentioned because they had the complete data for input as to how shot selection changed as the tournament reached its latter stages.

They studied 3400 shots for Djokovic, 3500 for Nadal and 1900 for Federer, adding context as to whether each shot was a return, a winner or an error.

"After about 1000 shots, the model has a pretty good idea of what is going on," Dr Denman said. "It needs about three matches to figure out a player's style. Once it's got those three matches it's pretty solid."

He said the system had the greatest difficulty predicting where Federer would land his next shot.

"It was least accurate for Federer, who is perhaps the most versatile. It struggled the most to predict him. He can do anything, so the model was more often wrong about him," Dr Denman said.

"Given how hard Federer's game is to predict, it just adds to the credit of someone like Stefanos Tsitsipas who managed a victory against Federer in the Australian Open on the weekend."

The machine learning system, called a Semi Supervised Generative Adversarial Network architecture, takes into consideration the stage of the game at which a point is being played. This is because the shot a player might make at 40-love and serving for the first set was likely to differ greatly from one played when struggling to avoid defeat late in the fifth set.

The system can predict about 1000 shots in 30 seconds.

More in this category: « ANZ extends Apple Pay offering with the choice of using eftpos Future-proofing your business in 2019 – five key questions »
Share News tips for the iTWire Journalists? Your tip will be anonymous