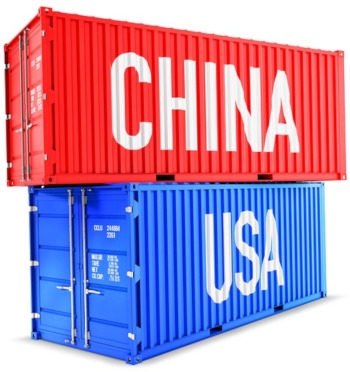 Shipments of desktops, notebooks and two-in-ones will experience an overall decline in 2019 but there will be some relief as there will be a second-half increase of 0.4% against the second half of 2018, the analyst firm Canalys has forecast.

The underlying strength in demand and spending by business would persist even as a shortage in the supply of Intel processors eased by the third quarter of the calendar year, the company added in a statement on Monday.

The company also saw pockets of growth, both in some market segments and in some parts of the globe, mostly in the Asia Pacific and South America, the two areas that would avoid a drop in shipments in 2019.

Last year, Canalys said growth for 2019 overall would be at 0.3% and forecast the increases would come in the Asia Pacific and North America.

"Problems with Intel processor supplies are set to ease from Q3 2019, providing relief to the market in the second half of the year and setting the stage for a tussle between Intel and AMD," said Canalys analyst Ishan Dutt in Monday's statement. 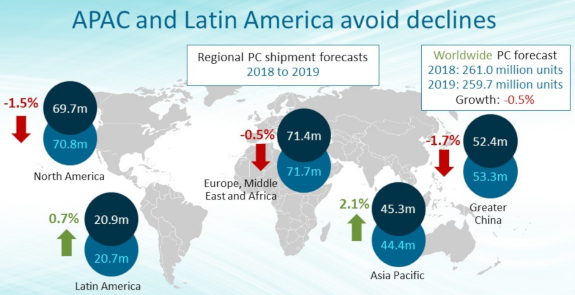 The Canalys statement said AMD had made a strong statement of intent with its seven-nanometer architecture announcements for CPUs and GPUs, and it was taking aim at new product segments like Chromebooks.

AMD had also benefitted by taking a greater share of the entry-level PC market as Intel was prioritising supply of its premium and server chips, such as Core i9 and Xeon respectively.

"AMD's strength in the cost-friendly segment in parts of Asia Pacific and Latin America is a major factor behind why these regions are set to avoid shipment declines this year - the only two to do so," added Dutt.

"Nevertheless, the next few months will determine AMD's long-term success as its reliance on Intel shortages comes to an end. In countries where it has enjoyed recent share gains it will be vital to build up stronger retail, sales and support capacity to cement its position."

Canalys said channel sentiment in the segment remained gloomy, highlighting the opportunity that still existed for AMD. Fifty-seven percent of PC-selling partners surveyed expected a medium to severe business impact in 2019 due to Intel shortages. 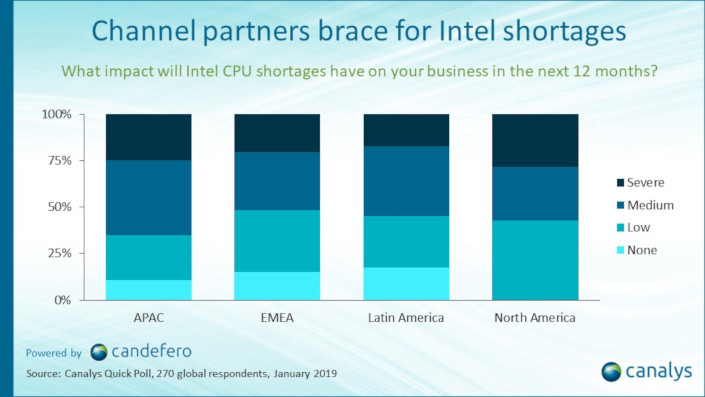 It claimed top PC vendors, like Dell and HP, were seeking new sources of growth. "Dell is making significant investments in gaining SMB customers, increasing the amount of its direct sales personnel focused on the segment and driving new products, including two-in-ones, toward commercial users," said Dutt.

"SMBs will be a key driver for tail-end Windows 10 upgrade demand. Dell is also revamping its gaming offerings across both the Alienware and Inspiron lines, including the introduction of upgradable gaming notebooks to broaden its appeal."

Canalys said as consolidation continued in a shrinking overall PC market, leading vendors were looking for opportunities to derive more value from the devices they shipped. On the commercial side, this would involve attaching services and solutions, locking in customers to stricter refresh cycles and positioning products specifically aimed at verticals.

"HP's expansion of its data-as-a-service offerings across Europe, which include Apple products, and its launch of dedicated hardware for education and healthcare customers, emphasises the importance of a strategy to tap into the key trends emerging in the commercial PC space," said Dutt.