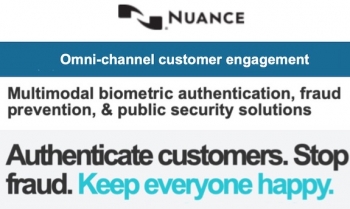 At a high level, Nuance tells us it is "the first-ever biometrics solution to bypass the industry standard of using a passphrase to validate identity (such as saying “my voice is my password”) to offer frictionless experiences, and while it’s being used by enterprises now, it is a core technology that can be applied to any device, smart speaker, etc. for security and convenience.

"With the new engine, a single human command to a smart speaker, virtual assistant or IVR is enough for that system to understand who is talking and what it is they want in as quick as half a second".

Nuance notes that "consumers are increasingly using voice to engage with the world around them – from communicating to their cars for directions to accessing their bank accounts via their smart speakers.

"The Nuance Lightning Engine allows consumers to set up a unique voice profile as part of an organisation’s account enrolment. When they contact that organisation on a voice channel, all they need to do is speak naturally and their identity is confirmed almost immediately, and a personalised interaction begins. No passwords or knowledge-based questions are required.

"Until now, the industry standard for authenticating someone through voice biometrics analysis with so little speech was through a specific passphrase. The Nuance Lightning Engine cuts that standard speech time in half, allowing organisations to validate a given person’s identity through natural utterances faster than the human ear."

Brett Beranek, the general manager of Security Business at Nuance's Enterprise Division, said: "Voice biometrics not only secures the voice channel, but when combined with NLU, is the foundation to frictionless experiences for consumers.

“With the engine, organisations don’t have to spend time checking to see if a customer is who they say they are when they engage on voice channels. Instead, they can immediately start personalising the interaction as soon as that person speaks, making it an effective, enjoyable and natural engagement.”

Nuance said its Lightning Engine "has been made available to a number of strategic customers through the Nuance Intelligent Engagement Platform", and that "the technology is expected to be generally available" in the US Autumn, which is Spring in the Southern Hemisphere.