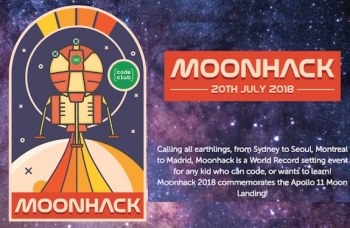 Helping your children learn to code could be one of the best ways to lift their future careers into cyberspace, with Sydney Startup Hub-based Tank Stream Labs to become "mission control" tomorrow for a world-record-breaking global coding event for children – Moonhack 2018.

Deputy Premier and Minister for Small Business John Barilaro said Code Club Australia, also based at the Sydney Startup Hub, would host the Moonhack 2018 event tomorrow (Friday 20 July) with Tank Stream Labs acting as one of Moonhack's "Mission Control" bases around the world.

“Moonhack is a terrific initiative which celebrates the anniversary of the moon landing on 20 July 1969 and which is all about getting kids excited about STEM and inspiring the next generation of Australian scientists,” Barilaro said.

“Last year Moonhack broke the record for the most children around the world coding on the same day with 28,575 kids taking part.

“This year Moonhack is aiming to have 30,000 kids participating at events around the world, creating games and animations about space.

“This is a fantastic event led by Code Club Australia which is inspiring children in Australia and around the world to learn how to code games and animations about space and improve their general coding skills.”

Sydney will be one of the first global events in this year’s series, with Moonhack 2018 launching in Auckland — the closest city to the International Date Line — and continuing around the globe.

“Our mission is to ensure that all children are given the chance to learn to code,” Dr Baker said.

“Our Moonhack campaign is an opportunity to set a world record, with our aim being to get as many kids as possible coding over a twenty four hour period. We want to ensure that every child in Australia is given an opportunity to shape their world and their future.”

“For the next generation of Australians to be competitive, we must urgently invest in the tech skills needed to compete in the new global market,” he said.