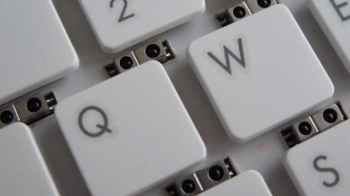 Microsoft's has come up with what could well be the keyboard of the future - a QWERTY-less device  that can interpret basic hand gestures, potentially bridging a gap between touch devices and more traditional input methods.

The Redmond-based technology giant presented the prototype keyboard at Toronto's Computer Human Interaction (CHI) conference yesterday. It boasts infrared sensors between the keys, 64 of them to be precise, and they detect hand movement as they brush over the top of the keyboard.

For example a swipe of your hand over the left or right side would bring up left and right side menus in Windows 8.

The 64 infrared proximity sensors powering the prototype keyboard have a very low resolution but boast a refresh rate of 300Hz, meaning they they can track rapid hand movement without difficulty. The sensors on the keyboard are in pairs, with one sensor emitting infrared light and the other reading the light reflected back.

The keyboard is equipped to recognise swipe-to-scroll, pinch-to-zoom, and gestures to switch between programs, and the main goal is for users to be able to keep their hands on or very close to the keyboard while typing and using input gestures, said Stuart Taylor, a Microsoft senior research engineer.

"What we've found is that for some of the more complicated keyboard shortcut combinations, performing gestures seems to be a lot less overhead for the user," he said.

Taylor said Microsoft's keyboard can interpret a number of gestures, though it's not designed to replace a mouse.

"It's less about fine-grain navigation, which would still be performed with a mouse or touchpad," he said.

The team has been working on the project for about a year-and-a-half ,but since it is still a research project there are no immediate plans for commercialisation... yet.

Check out the video below to see the keyboard in action.

More in this category: « Inside HDS's Asia Pacific distribution centre auDA chips in to support IGF »
back to top