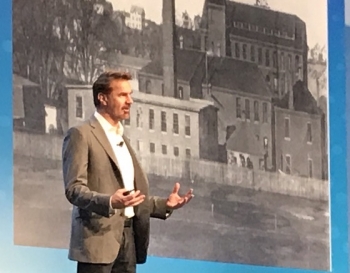 We are in the early stages of an important technological revolution, so there are lessons to be learned from previous revolutions, MIT Sloan School of Management professor Erik Brynjolfsson suggested during last week's Dell Technologies World conference in the US.

One of Brynjolfsson's key points was that technological advances may initially be used to simply replace what has gone before, but over time people find ways of using them to do things differently.

He observed that it took 30 to 40 years to get the full benefits of electric power.

Eventually, the model changed to giving each machine its own small electric motor, and that allowed factories to be rearranged to reflect the flow of materials, which resulted in major productivity improvements.

Mind and machine Traditionally, the highest paid person's opinion won the day. Now, there is a move towards data-driven decision making (including the application of deep learning), which improves productivity and profitability.

Product and platform All seven most valuable companies in the world are platform businesses. This is largely due to the way network effects lead to a winner-takes-all outcome. Network effects are often one-sided: a prime example is the phone system, where the number of possible connections (ie, value) increases more rapidly that the number of users.

They can sometimes be two-sided, he observed, pointing out that the more Uber passengers there are, the more people will want to drive for Uber. And the more Uber drivers there are, the more attractive Uber is to passengers. So it may make sense to subsidise one side (eg, by guaranteeing minimum earnings when entering a new territory) if that means you eventually make even more money from the other side (eg, by attracting and satisfying passengers who might otherwise have been put off by an initial lack of drivers).

Core and crowd This rebalancing is not as well understood as the other two, said Brynjolfsson.

Previously, companies have focused on their core competencies, a strategy sometimes described as 'sticking to your knitting.' However, there is no guarantee that an organisation really will be better than others at those tasks.

He gave the example of the National Institutes of Health taking four hours to sequence a genome. The expertise of Harvard University was sought, and that got the time down to about an hour. But when the process was made the subject of a public coding competition, the top performer's program could complete the task in around 10 seconds.

It wasn't simply that more people were looking at the problem, Brynjolfsson explained, but rather that they brought more diverse thinking to bear and applied different approaches. Such contests typically achieve at least an order of magnitude improvement, he said.

Another thing about large-scale technological revolutions is that while they make the pie bigger (there is now less poverty in the world than ever before, he said, as well as more millionaires and billionaires), there is no guarantee that everyone will benefit. It is possible that some people, even the majority of people, will be made worse off, he warned.

Despite productivity improvements over the last 20 years, median income had stagnated, observed Brynjolfsson. So how do we divide the pie?, he asked.

Technology does not decide the outcomes, we shape our destiny, he told the audience.

Disclosure: The writer attended Dell Technologies World as a guest of the company.

More in this category: « Amazon explores AI, machine learning and robotics at its Innovation Day 2019 Sun shines on Suncorp's new eftpos offering via Apple Pay »
Share News tips for the iTWire Journalists? Your tip will be anonymous