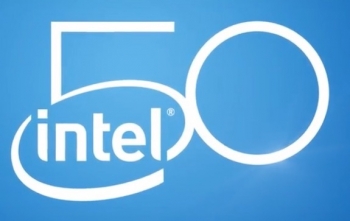 Intel has enjoyed many incredible achievements over the last 50 years, and while ARM and AMD processors are doing their utmost to disrupt Intel, Chipzilla keeps chipping away, even recently breaking a Guinness World Record.

On 18 July, Intel celebrated its 50th anniversary. It hasn't been all smooth sailing in that time, with various processor bugs from the Pentium era through to the Meltdown, Spectre and other security issues of the very recent past showing how decisions made in the past can have major implications in the present.

That said, Intel has been at the forefront of innovation for decades, and while the last few years before AMD's resurgence arguably saw Intel coasting along a little too frivolously right when it should have truly been putting pedal to the metal to better fend off the ARM threat and out-innovate AMD, neither of which Intel was arguably able to do, Intel is nevertheless still humming along nicely.

Sure, it's chief executive of the past few years had to leave due to alleged dalliances with an employee, albeit many years ago, but that CEO was swiftly replaced with an interim CEO, and the company will find a permanent replacement soon enough.

In the meantime, AMD's stellar efforts with Ryzen, Ryzen Pro and EPYC processors have stung Intel into action, with Intel releasing its Core i9 processor with 6 cores, and no doubt more innovation to come, even as AMD's incredibly fierce competition must have and must surely continue to shake Intel to its very core(s).

So, as we undoubtedly look to a future where Intel is firing on all cylinders and providing the strongest competition it can, and thus the best value possible to its customers, it's a valuable experience to look at Intel's past five decades, where it "evolved from a small memory manufacturer to a leader in the computing revolution".

Indeed, as Intel explains, while its role in the PC industry is well known, "Intel's full history is even more remarkable. Before the PC industry took off, Intel manufactured chips that were eventually used in everything from fuel pumps to airliners. It has pioneered advancements in car engine control and changed the way technology is marketed. It has also made many big financial bets on its ability to continue advancing processor technology".

Here are some videos on Intel's milestones, including a Guinness World Record set with Intel's drone technology. The article, milestones and an infographic continue thereafter, please read on!

You can read more at Intel here on 50 years of innovation at Intel, stories from people at Intel, as well as Intel's 50th anniversary press kit, which contains plenty of links to timelines, milestones, infographics and more.

Meanwhile, here are some milestones Intel has shared of its extraordinary history.

Click here or on the image below to see the full size image: 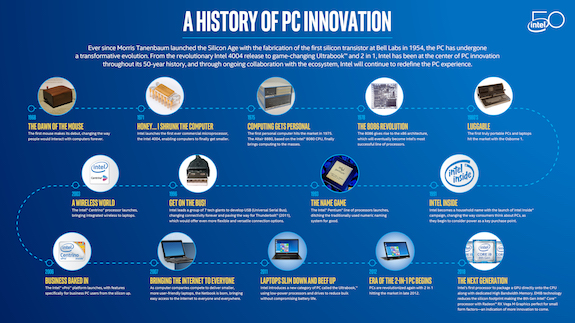 More in this category: « Cybersec firm Penten is the ACT's 2018 Telstra Business of the Year Just '1 in 3 customers' believe they can trust financial services companies »
Share News tips for the iTWire Journalists? Your tip will be anonymous