Image by Selena Jain from Pixabay

Shipments of PCs to India in the second quarter of 2021 grew by 43% year-on-year to 4.1 million units, marking a five-year high, the technology analyst company Canalys says.

Making up the numbers were half a million desktop units, 2.5 million notebooks and 1.0 million tablets, with all categories growing by double-digits after what was a bad second quarter in 2020 due to the ongoing pandemic.

Notebook shipments showed the highest growth of 43% year-on-year, tablet shipments increased by 52% and desktop shipments were up by 23%.

Among the vendors, HP stayed at the top, with shipments up by 54%, while Lenovo, which was first in 2020, fell due to sluggish shipments and gained just 3% year-on-year. Dell was in third spot, followed by Samsung and Acer.

“The market has finally returned to pre-COVID shipment levels,” said Canalys research analyst Ashweej Aithal. “While desktops and notebooks haven’t really seen a major bump in shipments, tablets are in much higher demand than before, resurrecting what was a dying category in India.

"Due credit for this should be given to remote learning, as well as the accelerated digital transformation of multiple industries and processes." 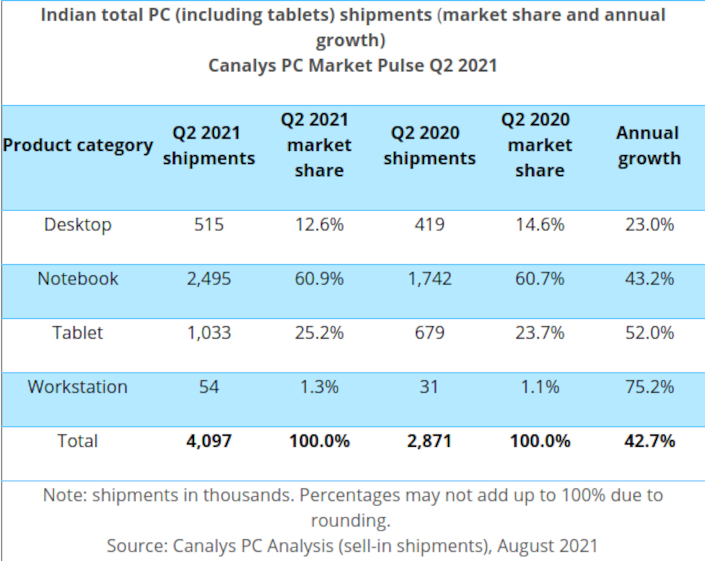 He said looking ahead to the second half of the year, Canalys had a positive outlook as major government and educational tenders, which were put on hold due to the COVID-19 Delta variant wave, were re-tendered.

“Compared to western markets, long-term demand in India remains low,” Aithal added. “While COVID-19 has helped move the needle slightly when it comes to PC penetration, it has been unable to generate a lot of demand, as vast portions of the population still regard PCs as a luxury, not a must-have.

"Added to that, India also has some of the poorest broadband penetration rates in the world. While the long-term outlook for PCs in India is still positive, it is not going to outshine the US or Western Europe.” 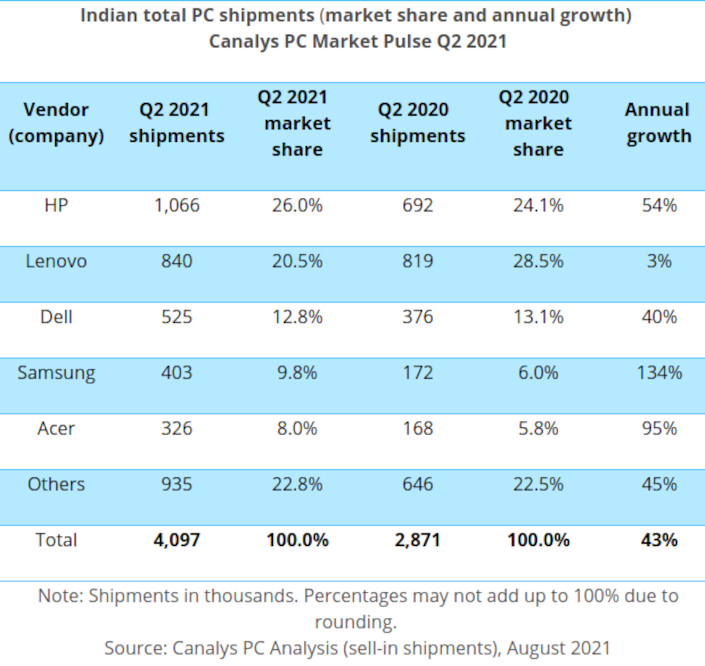 More in this category: « Australia public sector IT spending set to rise by 9% next year Airwallex reaches US$4B valuation following latest investment round »
Share News tips for the iTWire Journalists? Your tip will be anonymous