Cisco and Titan Class: working together to bring 'agritech solutions' to market 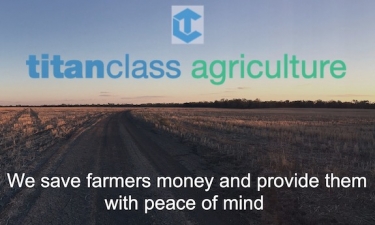 Developed over the past 21 months in collaboration with Cisco’s Internet of Things (IoT) development expertise and its Co-Innovation centre, Titan Class reports now being in a position to bring its software decision platform, known as “xDP”, to market.

Titan Class said its mission is to “bring Silicon Valley thinking to Australian Agriculture” and Cisco has been working with Titan Class to achieve this goal.

Cisco said it has "invested substantially in Titan Class to create the software platform, having originally commenced development in 2015 with the announcement of the Australian Cisco Innovation Central investment with a focus on Agriculture."

Kevin Bloch, Cisco A/NZ's CTO, said: “As a continuation of Cisco’s investment into digitising Australian agriculture that will positively impact and contribute to Australia’s GDP, we are very pleased with the investment we’ve made and look forward to continued partnership with Titan Class to pursue this global $3T opportunity.

"Australia can lead the world of agricultural technology through companies such as Titan Class,” added Bloch.

Titan Class said its "proven xDP technology enables farmers to easily instrument their farms with thousands of low-powered, third-party sensors that are already available in the market, and consolidate their insights into a single application on any smartphone, tablet or personal computer.

"This burgeoning ecosystem of quality sensors can monitor water levels and flow rate, electric fence voltage, weather, the location and movements of livestock and hundreds of other farm functions.

"With a single Titan Class deployment, farmers can use up to a thousand sensors without restriction. These sensors have been proven on operating farms to reliably communicate over several kilometres from a simple on-farm communications tower and each sensor has inexpensive commodity batteries that can last for years.

"Critical and distinctive to the Titan Class approach is its flexibility to adapt to any current and future network environment.

"At present, internet connectivity is frequently unreliable or even absent in rural areas due to the significant distances involved and because there are minimal regulatory obligations for high quality internet services to rural customers.

"Many new technologies, such as satellite uplinks and shared low-powered networks, are emerging to help address this well-known problem (with various complex trade-offs). Titan Class carefully abstracts these networks away and today delivers farmers a flexible, future-proof platform that works without needing the internet.

"According to the World Bank, agriculture is a US $3 Trillion industry. No one is leading the charge to dominate this fourth generation of agriculture. Titan Class, in collaboration with Cisco, is ideally situated to do so right now."