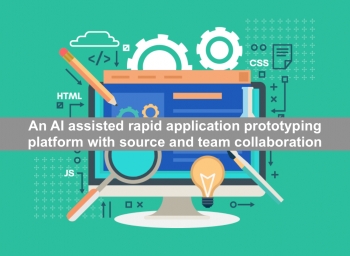 Many start-ups need to develop a website or mobile app for their business, but if you don’t have a background in app development and you are short on funds, how can you do it and where would you even start?

ADEVI is a new platform has recently launched that "removes most of the obstacles that people currently have to overcome when they are starting their own venture".

Founder Marat Basyrov said: “ADEVI is an app development platform that automates the key areas of front-end development. Usually, this process would require technical knowledge, thousands of dollars and at least a few weeks.

"You can literally upload sketches, text descriptions, screenshots or visuals and then the app will make suggestions for improvements, but it will also use AI to learn and adapt to you according to the instructions and changes you make.”

We're told that ADEVI "incorporates machine learning, which means that the more you use it, the more it learns what you want, and for non-technical creatives or agencies who want to develop applications for either web or mobile, it’s a godsend.

"Using ADEVI means that you can prototype mobile and web apps by uploading your existing designs or interact with the system in a natural way, like you would communicate with app development company explaining your idea.

"It designates the areas that you want to be interactive or have links to other apps and then invite your developers to finalise the front end using the source code that has been generated by ADEVI."

Basyrov added: “Machine Learning and Artificial Intelligence have been around for more than half of a century, but it is only now with the advancement of the technology that is going to change how people behave in the future.

"I'm excited that ADEVI is spearheading this revolutionary change in the app and software development industry."

He also reminds us that "for most tech start-ups, the early stages of development can be incredibly time-consuming.

"For a start, issues like resource planning, stakeholder communication and documentation can be distractions that take you away from the core of the business development. Instead, ADEVI helps founders focus more on the core issues of what technology to use and how to take their innovation to market."

According to ADEVI, the five key issues most founders find they face in their software and app development businesses are:

The company says "ADEVI was created to simplify the process of web and mobile app development".

Basyrov added: "I believe it will revolutionise the industry and allow the software development companies to provide better service to the general public.

“I’m looking forward to seeing what innovative projects will be created with this powerful tool.”

ADEVI has recently been featured on That Start-Up Show and will also be showcased at StartCon finals in Sydney in December where it reached through the finals by becoming top project selected in Victoria, Australia.

More about ADEVI, and to learn how to create your own app using the platform, click here.

More in this category: « Women entrepreneurs supported by Apple's new app development program OPPO to become a Melbourne Star »
BACK TO HOME PAGE
back to top