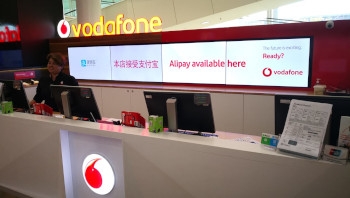 Vodafone Hutchison Australia has cut a deal with China's Alipay to provide the service at 110 of its stores across Australia.

A statement from Vodafone said this meant Chinese tourists could use their preferred QR code payment method in-store.

VHA claimed that Alipay has more than 700 million active users in China; in Australia more than 10,000 shops accept Alipay.

Alipay is a payment service from Ant Financial Services. It is part of the Alibaba group, the most popular ecommerce platform in China.

The Vodafone announcement comes shortly after Golden Week, a semi-annual seven-day national holiday (1-7 October) during which many Chinese people schedule their vacations.

Alipay data showed Australia was the ninth most popular travel destination based on payment volume, and the most popular outside of Asia, with 105% year-on-year growth.

VHA said it would use Alipay's in-app marketing to promote its pre-paid SIM cards to Chinese citizens who are holidaying in Australia or travelling for business reasons.

“Alipay helps us continue to differentiate Vodafone as the number one choice for Chinese visitors to Australia.”

The country manager of Alipay ANZ, George Lawson, said, “With almost 1.4 million Chinese visitors arriving in Australia each year, it’s simply too large an audience to ignore and forward-thinking businesses like Vodafone are increasingly giving themselves a competitive advantage by letting visitors pay in their preferred way.

“Using our technology, Vodafone will now be able to communicate with a customer as soon as they land at an Australian airport to offer them a discount on a local SIM card or other services.

"Chinese consumers are tech-savvy and want to find the best deal, so time and time again we see these types of offers are incredibly well received.”