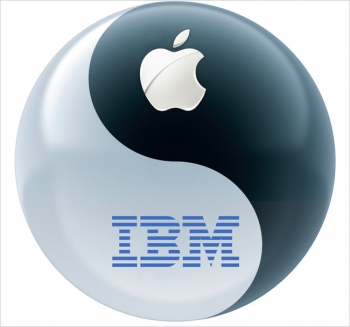 The biggest IT company of the 21st century has joined with the biggest of the 20th century in an unlikely alliance. Here comes IBM’s big data and analytics on iPhones and iPads.

‘Hath hell frozen over?’ reads one headline. The odd couple of Apple and IBM have jointly announced an exclusive partnership to develop a new range of iOS apps that will pair Apple’s mobile devices with IBM’s back office software.

The relationship “teams the market-leading strengths of each company to transform enterprise mobility through a new class of business apps—bringing IBM’s big data and analytics capabilities to iPhone and iPad,” reads the breathless statement issued today.

The deal confirms that the iPhone and iPad have become important tools in the big end of town. It will give Apple’s ubiquitous mobile devices a head start in tying in with corporate applications – something the burgeoning mobile device management (MDM) market has been trying to do for the last few years. It will even see IBM selling iPhones and iPads.

How the world has changed. Hell is indeed freezing over. It is now nearly 30 years since IBM came within a whisker of buying Apple – the senior management was in a hotel suite to sign the deal when Apple got cold feet at the last minute.

How different the industry would now look if that deal had gone ahead – Microsoft’s desktop dominance would most likely never have happened.

Here it is 2014 and new realities are once again turning the industry on its head. IBM has faded, and Apple is top dog. The epicentre of IT has moved from the enterprise to the individual. But IBM, though much diminished, is still important, particularly in very large enterprises where mainframe computing is still the ways things are done.

Those mainframes are often as not in specialist outsourced data centres, their data delivered via the cloud, but the underlying architecture is still based on the paradigm IBM set when it started the modern computer industry with the release of the S/360 almost exactly 50 years ago.

The announcement has four major aspects:

The companies say the combination will create apps that will “transform how businesses and employees work using iPhone and iPad, allowing companies to achieve new levels of efficiency, effectiveness and customer satisfaction.”

One of the most interesting aspects of the announcement, and one that indicates how far-reaching it is, is that IBM will also sell iPhones and iPads loaded with MobileFirst apps to its enterprise customers.

“iPhone and iPad are the best mobile devices in the world and have transformed the way people work with over 98% of the Fortune 500 and over 92% of the Global 500 using iOS devices in their business today,” said Tim Cook, Apple’s CEO.

“For the first time ever we’re putting IBM’s renowned big data analytics at iOS users’ fingertips, which opens up a large market opportunity for Apple. This is a radical step for enterprise and something that only Apple and IBM can deliver.”

“Mobility—combined with the phenomena of data and cloud—is transforming business and our industry in historic ways, allowing people to re-imagine work, industries and professions. This alliance with Apple will build on our momentum in bringing these innovations to our clients globally, and leverages IBM’s leadership in analytics, cloud, software and services.

The apps will be available under iOS 8. announced at Apple’s Worldwide Developer Conference in June and available later this year, “For enterprise, iOS 8 builds on the new IT model for a mobilised workforce by improving the way users are informed of how their devices are configured, managed or restricted, with expanded security, management and productivity features.”

This is an important deal. It lays down the gauntlet to Microsoft, which has high hoped in the enterprise for its Windows Phone operating system. It leaves Android to consumers, and BlackBerry with nowhere to go.

More in this category: « My Net Fone acquires iBoss CloudFlare picks Equinix for big expansion »
Share News tips for the iTWire Journalists? Your tip will be anonymous